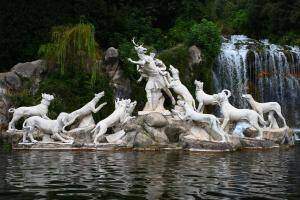 There are obvious correlations between Cancer and the Moon. Both are emotional and both are concerned with home and family. But the similarities don’t stop there. One aspect that I think is often overlooked is the quality of protection.

The Moon represents our softest, most vulnerable self. It’s the place that calls us to retreat from the world and look for safety. It’s the small child within us that still looks for a mother’s arms. And that small child needs protection. And Cancer is perfect for the job. With its hard outer shell to shield and pincers to keep others from getting too close, Cancer is a supremely protective sign.

It reminds me of the story of Artemis and Actaeon. Artemis, the great lunar goddess, had to be strong. She was a goddess, for goodness sake. She couldn’t show vulnerability to her worshipers. But luckily, she had a respite.

One day, after working hard to appear strong and flawless, Artemis was exhausted. To soothe herself, she retired to her favorite place in the world. Deep in the forest of Gargaphie, beyond the hustle and bustle of nearby Thebes, lay a pure, untouched spring. Artemis approached and took a deep breath, delighting in the way the pines and cypress trees perfumed the air. Her handmaidens took the bow and quiver from her limp arms and undressed the tired goddess. She slipped into the pool and let the waters caress her body, letting out a little sigh of contentment. She was home.

But just as she began to relax, movement from the tree line caught her eye. She whipped her head around and saw a man staring at her. And not just any man. This was the Actaeon, prince of Thebes, well known for his arrogance and sense of entitlement. And here he was, hunting in her sacred grove and brazenly gazing upon her as if he had every right to invade her privacy.

She jumped out of the pool with an enraged cry. Her handmaidens crowded around her to shield her nakedness, but being a goddess, she was much taller than her human servants, and her chest still lay bare. As Actaeon continued to stare with a grin on his face, Artemis raised her arms and said, “Go ahead and tell everyone you saw me naked. That is, if you live to tell about it.”

With that, horns began to sprout from his head. Fur began to grow all over his body, and he was brought to all fours as his hands hardened into hooves. He tried to cry out, but only a pained bleating escaped his throat. The transformation was complete. He had become a stag.

At the same moment, Actaeon heard the howl of a pack of dogs – his own hunting dogs, in fact. He turned to face the furious beasts and again attempted to cry out, to make them recognize him, but again only the strangled bleating of a stag could be heard. He turned and ran, desperate to escape. But with Artemis’s goading, the dogs chased after him and eventually caught up, leading to his grisly end.

Artemis smiled, satisfied. He had invaded her sacred space. He put her in a place of vulnerability without her consent. He broke her protection. His punishment was just.

The Moon needs safety, a place away from threats and prying eyes. In this story, Artemis tried to do just that, retreating to her space of safety and comfort, the equivalent of Cancer’s shell. But Actaeon tried to breach the shell, he got the crab’s claws instead. That is why the Moon is dignified in Cancer. The Moon needs a comforting home, and by hook or by crook, Cancer WILL provide it. Armed with shell and claw, Cancer keeps us safe.

Do you have the Moon in Cancer? If not, how do you protect your safe place?