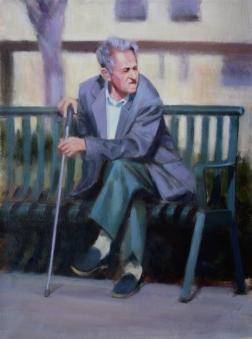 I wonder if anyone else has this experience – things happen to you that are big, too big for you to comprehend.  Like that Red Handtruck story. That was something that happened that was beyond my comprehension. I never gave it a thought, 30 minutes after it happened and did not think about it for at least 10 years after that.

10 years later or so, I told the story to this astrologer online – he was the first person I met online….and the only person I knew or communicated with for about six months.

What happened was I had a Mountain Astrologer magazine. It listed websites in it, for the first time, ever. This was about 17 years ago. One of the websites was the newsgroup, alt astrology. So I went there, and somehow. I posted a message, somehow and this guy, a Scorpio, flamed me.

I didn’t know what a flame was, so I answered him back, earnestly. Credit his intelligence and his sensitivity because he was able to discern I was worth talking to…I can only imagine how bad my writing would have been back then.

In whatever case, I told him this story, sort of randomly. I don’t recall why, but he reacted to it.  I didn’t know why he reacted to it, but he did. And I didn’t think about it after that, for a number of years more….maybe seven or eight years.

And then one day I decided to write the story, which I did. I had no reason to write it. I was writing numerous stories about my life and this was one of them.

So there is that, but there are other things in my life, that seem to dwarf that..I think. I don’t really know how to compare experiences of this type, or knowledge that comes to you that is really pretty singular, or at least so rare, you’re not likely to meet someone who you can compare notes with. So I live with stuff like this and then occasionally (rarely, because of my gnat-like personality), I get a brief glimpse of the scope of what I’ve seen, or what had shared with me and think, oh shit! Anyone but me would be able to figure this out!

I don’t know why I can’t internalize this stuff, or assimilate it or whatever. Why can’t I understand it?

I think it’s one thing to not understand how music comes through you, if you’re a gifted musician.  But seems to be a bit different.

Yesterday I read about a guy who used to dream math, 1o0 years ago. He wrote down some rough equations and his rough theory, on this deathbed…100 years later, his theory has been proved.  I think I am more of this ilk. For one thing, I am a communicator. I can write and tell a story and what not.

In the past I have told the stories, even when I did not understand them, and perhaps I have to go back to that. I can’t see how to do that right now and I hope it’s not because I am lazy or stupid or something.  I don’t want an experience to be wasted on me, but I am afraid they are.  I can’t understand them, so perhaps the thing to do, is to tell the stories, and leave them for someone else to understand, even if it takes 100 years.

It pains me to say that, but like this guy with his equation, I just can’t get to what I can see.