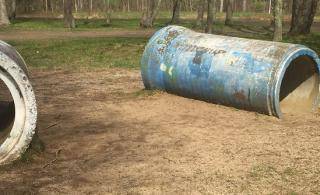 I was visiting four women; all of them professionals. I said something provocative about my son and they all reacted.

“What?” I said. “So he’s acting in a certain way. I bet if you thought about it every single one of you could come up with evidence… things you were doing when you were a kid that would indicate your career, what you wound up doing. You know. You’re five years old and it’s already happening.”

There was a moment of silence then a room full of nods.

When I was a kid they used to have these huge pipes on playgrounds. They made of concrete and you could climb on them or crawl through them. They were large (a small child could stand up in a large one) and you could go in there and yell and hear yourself echo.

I started first grade early and I had this friend, Mona. I was the youngest in my class. I’d just turned five, but Mona was smaller than me. She had big eyes and I pretty much thought was was the most beautiful girl in the world. In fact, having a lowly, Caprcorn nature, I couldn’t believe she wanted to be friends with me.

I felt big and lumbering around her though I probably weighed forty-five pounds. We used to hang out together on the playground and we liked those pipes the best. You could lie on top them. They’d be warm from the sun and it would warm or sometimes even burn your skin. One day she asked me to sit in the pipe with her.

Sitting in the pipe she confided her parents were getting divorced and proceeded to burst into tears. I didn’t know what to do. I barely knew what a divorce was. I may have been five years old, but I could read at a 7th grade level and I had read a hell of a lot of books! My mind scrambled, reviewing everything I knew so I might come up with the right thing to say.

I didn’t have much to offer. I wasn’t eloquent, that’s for sure but I sat with her as she heaved and sobbed. I stayed with her, even after the bell rang. You know I was a teacher’s pet so would never be late to class but what could I do?

Eventually, Mona, pulled herself together and we went back to class. She moved and changed schools not long after that. No doubt this was due her parents separation. I think this was telling as far as my future and my destiny.

I have never forgotten Mona and her big eyes crying. They experience was so bad for me… I was so pained to be so inept in providing her solace I wonder if I have not made it my business to have something to offer anyone might come to me.

If you think it about can you see how started training very early for what you have become?