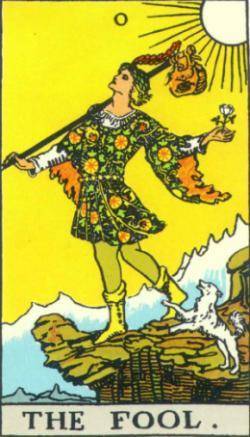 Another critical degree in astrology as 0 degrees. Where 29 degrees signals an extinction burst as the energy of the planet finishes its lessons, 0 degrees is a breath of fresh air. When a planet is at 0 degrees, everything is light, sparkling, and new. It’s bright eyes, rosy cheeks, and full of wonder. It’s innocent and pure, but also immature and inexperienced. It is The Fool in tarot. To quote a Smashing Pumpkins lyric, it is, “impatient, in love, and aching to be.”

When a planet is at 0 degrees, there is a sense of the whole world in front of it, ready for exploration. But there is also a vulnerability as it encounters new energies for the first time. Like anything in its very first stages of development, there is infinite possibility, but so, so much to learn.

One of my best friends growing up had the Moon at 0 degrees Leo. She was the shiniest person I ever knew. She had a distinctive, bright, colorful sense of style that was completely unrestricted any social norms. Rainbows EVERYWHERE. She was the very embodiment of optimism, and to her the world was full of beauty. But that Moon was also in the 6th house opposing Mars. She was perpetually shocked by the cruelty of the world. The very idea of death or injury seemed to be a surprise to her every time she encountered it, and because of this she had terrible anxiety. Once, seeing a baby bird that had fallen out its nest sent her into a tailspin that lasted for days. I can’t help but wonder how much of what she saw in the bird she also saw in herself.

Another childhood friend of mine had Jupiter at 0 degrees Pisces. He was convinced that he could “find the answer to spirituality”. Despite Jupiter opposing his otherwise discerning Virgo Moon, he had an enormous sense of credulity about him. He was fully willing to consider any and every spiritual idea he came across, giving equal weight to every notion and wholeheartedly inhabiting ideology. He was, naturally, a joy for my urgent 29 degree Jupiter to talk to. But that eager innocence also led him to being caught up in a number of terrible ideas, from a brief stint in a cult to a belief that he could retire at 30 if only he hoarded and invested his wealth properly, which led him to deny his wife and child basic medical necessities in service of his big idea.

That is the inherent risk with 0 degree placements. There is so much enthusiasm and willingness to go wherever the energy leads us. But because the planet is so new to that energy, we simply lack the experience to know how to handle the energy properly. It’s just like being young, when every experience hits so hard and is so intense, overwhelming, and bewildering. A 0 degree planet is meant to explore, to take its knocks, and to get back up and keep going. It’s a whole, wide world out there. Get out and see it!

Do you have planets at 0 degrees? How do you experience them?