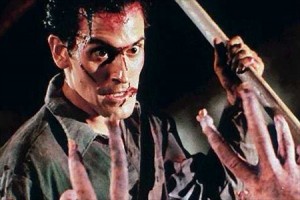 My son has Scorpio rising with Pluto conjunct which touches nearly everything in his chart. This kid is deep as a desert well. Halloween is his favorite holiday and every fall about this time he treats me to an extended horror movie marathon. Today marked the first of these movies, and with Venus and Mars beginning their joint transit through Scorpio it’s perfect timing.

I’m not a fan of hack-em-up horror, not at all, so initially I wasn’t thrilled by his first choice: Evil Dead II. I was so wrong; it is perfection, campy and perfectly timed, without being cheesy at all. Sam Raimi directed this mid-eighties “classic.” Sam Raimi is best known for the Spiderman series of films. He has a Libra Sun and a Cancer Moon, so I would’ve thought classic romance films for watching wrapped up with your sweetie at home, not director of one of the top cult horror hits. But Raimi has a Scorpio Mars, and coincidentally had his Mars return just hours prior to my watching Bruce Campbell wielding a chainsaw as a right hand prosthesis.

Part of what makes this movie a tremendous success is its unpretentious sense of humor. It’s hilarious, but clever. The movie is better than its genre, doesn’t take itself overly seriously, and is laugh-out-loud funny over the top of its creepy subject-matter.

The other reason this movie is such a cult-success is its star, Bruce Campbell. With Mars in Aries, Venus in Taurus and classic leading-man looks he seems the perfect candidate for wider success as an action hero. While he’s a well-known face as a character actor, he never surpassed his B-Movie fame. Perhaps hard aspects between his Mars and his Pluto-Moon conjunction figured into that, perhaps it was his Venus-Saturn contact. But you know, it could be something as simple as it not being the path he wanted or chose.

In any case I’m now publicly staking my claim to Bruce Campbell as my imaginary Hollywood boyfriend.

Are you feeling the depth (or the creepy) as Venus and Mars tour Scorpio?