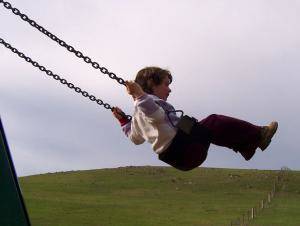 This is my version of what I think is a common phenomenon. Swinging out…and swinging back. Sorry that’s vague. It’s meant to be because I think this…common!

For years, I listened to one side of a story, told by two people. It was very convincing. I accepted it as truth. But then I met the person involved.

Some time passed. Not much. A few months, not years. This again, came up with one of the tellers of the original story. I mentioned what I thought were solid arguments / facts presented by person number three.  Though I was not pressured, the person quickly pointed to the holes in that narrative.

At this point, I don’t know. But I again expect that the first story I heard is the real one. The tellers of the first story hold the key to the third person’s life. But that person is so into being right themselves, I don’t think they’ll ever realize it and their problem with go unsolved.

I am the person who swung out…and swung back in this story. I’ve done this many times in my life. I have something of substance and trade it for fluffy veneer. Thankfully I come back. I don’t want to live in delusion.

It’s a Saturn Neptune thing, I think. I’ve always been easy to trick.

I hardly think this is a good quality, but I am not sure I’d trade it for that sharp keenness that cuts others and often the self.

Do you recognize yourself in this story? Who are you?