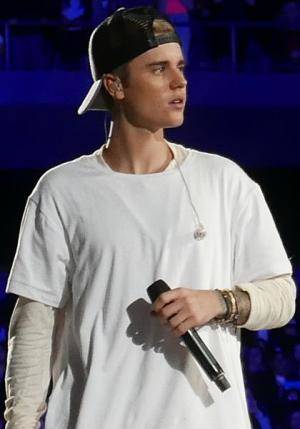 Right after doing the Courtney Stodden article, I came across something about Justin Bieber. I know I should know about his music, but I have never listened to even one song. He’s just not my generation… I’m listening to the oldies!

But I was curious so I pulled up his chart. Lo and behold, he has the Uranus/Neptune conjunction like Courtney Stoddard- they were both born in 1194. So now I have to ask: why is he so successful and poor Courtney is a hot mess?

For one thing, and it’s a big thing, his Uranus/Neptune conjunction is not making stressful aspects to any personal planets. Where the U/N conjunction SQUARED Courtney’s Venus, they SEXTILE Justine’s. And his Venus is on his Midheaven, ensuring the whole world will know of his special brand of talent.

The Uranus/Neptune conjunction in Capricorn is an aspect that can build (Capricorn) magic. Breaking it down, normally Uranus and Neptune would not be friends… Uranus is detached, iconoclastic, smashes boundaries, and Neptune just wants to merge into others, become one with all and attain spiritual bliss. Uranus looks and Neptune and says “are you kidding me???” 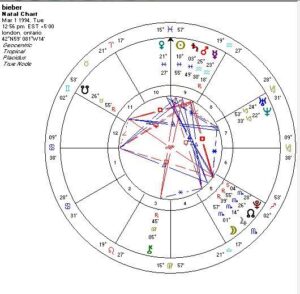 But, taking the best of each planet, Uranus can signify a unique appeal to the masses. Neptune brings the glamour. Have you ever seen the Robin Williams You Tube video on how the drunk (Neptune) Scotsman invented (Uranus) golf? Now *there’s* a Uranus/Neptune combination, all by itself. However, in 1994, these planets are answering to Saturn (ruler of Capricorn). They are “hobbled”, if you will, by the limits of Saturn.

Saturn ask us to structure and plan. Where both Neptune and Uranus are not normally “planners”, utilizing this positive part of Saturn, you can take the creative genius inherent in this combination, and build something lasting. Whereas Courtney took the easy way out, using her body for fame, Justin has structured his talent into a fine-tuned machine. The difference is in how this combination is aspected. Venus rules the throat and many talented singers have a well aspected Venus. In Justin’s case, it is in Saturn’s house, bolstering the connection to the Capricornian Uranus/Neptune. They understand each other. They cooperate.

In addition, their Saturns are aspected very differently. It’s important to look at Saturn, because it’s the ruler of that Uranus/Neptune conjunction. In Courtney’s chart, Saturn’s part of a painful t-square, but in the end, if she were to stop fighting what Saturn is asking of her, she stands a good chance of becoming a role model for others! Justin’s Saturn is widely conjunct his Sun and is opposed by Chiron, but is trined by Jupiter. He will most likely not need the painful 2×4 and instead learns his lessons more readily. And, last but certainly not least, his Sun is in Pisces, ruled by Neptune.

So why does he keep ending up in brawls with neighbors and police? Short answer: Mars/Mercury, 9th house. Ruled by get-outta-my-face Uranus.

Were you born during this conjunction? Tell us! 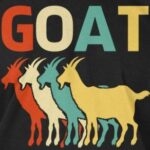