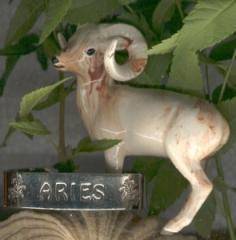 Not that I’m wanting to right now, but the idea is eerily appealing considering I’m the kind of girl who never expected to want to marry anyone <em>ever</em>. But for some reason, this person doesn’t provoke the “eek! marriage!” effect.

First I would say if you are attracting someone with Uranus in the 7th house, you are probably somewhat commitment-phobic yourself and sure enough, I see a tight aspect between Venus (7th house) and Uranus. Never mind you are an independent Aries with a detached Aquarius Moon!  But to answer your question, I think it is fine to marry someone with Uranus in the 7th house and you may even be able to stay that way if you give them lots of space.

You will have to deal with their impulses, which becomes possible when you can deal with your own impulses. And these relationships to tend to work best when there is regular separation.

The example that comes to mind is astrologer Stephen Arroyo’s remarks in one of his books.  For a time, he worked near an Army post and had a lot of Army wives as clients. He states he could not help but notice 70% of the women had Uranus in the 7th, so you see how this worked for them: their husbands were not around interfering with their freedoms.

Closer to home, when the soldier and I were together as kids, he went to work for 24 hours and then was home for 48 or some such schedule. This meant I could look forward to his leaving LOL and of course more recently, he has been driving a truck!

What we will do now remains to be seen but we will have to do something because like you, he has Venus in aspect to Uranus himself and the energy is going to play one way or the other.

If you like eccentrics who are unpredictable in love, if you do not wish to be bored and you can provide your own sense of security, then Venus Uranus is probably your ticket.