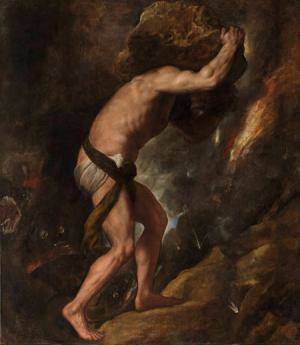 The image of Sisyphus relentlessly rolling a rock up a mountain, only to have to watch it roll back down, and start all over again, is pretty much ingrained in every one who has gone to grade school. In astrology, I personally think Sisyphus was undergoing the transit of Saturn chasing the Progressed Moon.

Saturn and the progressed Moon both take approximately 29 years to circle your chart. Saturn back-and-forths through direct and retrograde motion; however, the progressed Moon only moves forward, at different speeds throughout the 29 year cycle– some signs are “faster” than others as the Moon progresses through them. Thus, you can be born without Saturn and the Moon being aspected in your chart, but through the years, they may catch up with each other, and begin a dance. Usually it’s not a dance anyone jumps for joy about. Saturn and the progressed Moon can signify a time of hardship and endurance that completely tasks a person for all they are worth, especially if other outer planets are aspecting Saturn/Moon at the same time. The opposition of Saturn/Moon feels as if someone “out there” is denying you anything and everything you need in order to feel secure. The square is felt as a constrictive noose around your own neck. The conjunction may be the easiest of all the Saturn/Moon aspects, because you feel that you have some control over events.

There is an emotional desert to pass through here. There may be very, very little accolades for the hard work you’re putting out; in fact, they may just keep piling things up for you just because you CAN get it all done… until one day you find your well has run dry and you absolutely must stop carrying the boulder on your shoulders until you do some self-care. The mind-body connection is never so obvious. Saturn’s deep meaning is to stop looking for validation anywhere outside yourself. There will be no authority figure, parental figure, or partner that will give you permission to put the boulder down. You have to make the decision yourself. It’s an inside job.

Look at the houses that both Saturn and the Moon rule in your natal chart; these seem to be general themes for the transit, even while Saturn and progressed Moon transit elsewhere. The transit usually lasts between 4.5 years to 15 years, although I have seen it in effect for 29 years. Find yourself a Saturnian type (someone old, and wise) who can keep you from giving in to the negative voice of Saturn when you’re having a hard day. You’re more likely to trust someone who has trod the road you’re now on.

You emerge from this transit a true survivor. You’re stronger, you’re wiser. The dearth of support has caused you to be grateful to anyone who has stood by you through the years. You know who your true friends are, and most of all, you now know how to be a friend to yourself. This is the alchemical Gold of Saturn.