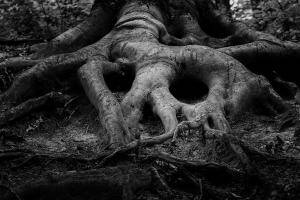 In the forums, there’s an interesting conversation happening about ancestral trauma. I thought I would share my story because I have a few theories about the astrology.

If you’ve been reading here a while, you know both my 4th and 8th houses are jam-packed. The 4th house rules family and roots and the 8th rules legacy and the dead. Most of the time this is benign, but sometimes it can get downright spooky.

I have a friend who is reliably, verifiably psychic. Years ago, we were sitting around talking when suddenly a blast of cold air blew through the closed room. My friend turned to me with wide eyes and said, “Um, your grandfather is here. Your mother’s father.”

Now, he had died before I was born and I knew nothing about him. He and my mother were estranged, and she refers to him only as a sperm donor. In fact, she never speaks about her childhood and I know nothing of her life before the age of 17 or so. She’s a Scorpio Moon, so you know she’s not about to volunteer information.

“He says he’s in a kind of limbo and he’s trying to make amends for the way he lived his life. He’s…oh my God, he’s opening himself up. He’s pointing to his rotten guts…I think it’s his liver? He must have been an alcoholic.”

“Okay, but what does that have to do with me?”

“He says he used to be just like (my abusive partner at the time). He says he’s been protecting you in the way your grandmother should have been protected from him.”

“He says to ask your mom about the farm on the hill. About his boots. About the chickens. He says his name is Clyde. And he’s sorry.”

And then the cold air went away, but my friend and I were both thoroughly shaken.

About a week later, I sat down with my mom and asked her to tell me about her father and early childhood. I didn’t let on about what had happened, only asked questions.

She sighed. “Well, we lived on a farm, right at the top of a huge hill. I remember going and playing with the chickens and running around in nature. The sperm donor used to clomp around in these big, muddy boots and he would always get dirt all over the floor and we had to clean it up. He…he was awful. He hit us and we were terrified of him. He eventually drank himself to death.”

I took a deep breath. “And what was his name?”

So that’s my story. I have a theory that this happened to me because of those packed houses I mentioned earlier. My job is to work with my ancestors (4th) to heal the legacy of the dead (8th). I don’t know what he did, but I survived the abuse and came out stronger on the other side. So I suppose I owe him gratitude. Thank you, Clyde.

I want to know if anyone else has stories like this! Have you ever had a supernatural experience, especially one involving your ancestors? What are your 4th and 8th houses like?