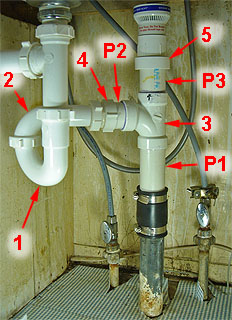 Besides the disaster that is this house at the moment, the soldier has the kitchen pipes dismantled which is textbook Pluto Moon.

When Pluto was stationing in aspect to my Moon last time, my ex, the AMF with his four planets in Scorpio came by and tore out my entire kitchen. He stripped it down to the bare walls and one pipe sticking out from the wall. My entire kitchen sat out in front of my house for a week waiting for pick up… a purely Pluto Moon experience.

He then rebuilt the kitchen and he did a great job. He had no problems save that one pipe… the drain pipe this is which for some reason was placed high when it should be placed low.

This is a problem because water runs downhill not up and there were only two choices.  He either had to make it work (it had been made to work before) or bust through the exterior wall of the house and redo the plumbing. He chose the latter and it’s been fine up until recently… up until Pluto turned retrograde.  At that point  the garbage disposal broke and I started having back flow problems so now what?

Well I’ve been living with it awhile because I knew the soldier would be here soon and could fix it for me. Much better than having some man in the house (personally I hate that because there is always a charge).  But anyway he’s in there now fighting that pipe and I am just here to say you almost never hear of someone with a Pluto transit to their moon who does not have pipe problems in their house. This has got to be one of the most predictable things in astrology.

Are you comfortable with workmen in your house?