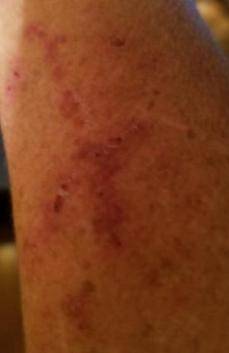 Pluto went into my 12th house in 2007. I’ve been tracking this transit since.

I took this on because when I searched this transit back then, everything I could find was horrible and frightening. I knew that couldn’t be right.

The 12th house is associated with prisons and hospitals. Pluto is associated with death and things and people who are repulsive.
Pluto being in Saturn-ruled Capricorn certainly wouldn’t be seen to as an alleviating factor. It really does make you think of being shut away with some disfiguring disease, so the public doesn’t have to suffer your presence.

Astrology That Scares The Hell Out Of People: Pluto Transit the 12th House

If you like this kind of stuff, you can click the tag and immerse yourself. In whatever case, it’s time for an update.

Many of you know that I have Lupus. Yesterday, I was outside for about 90 minutes. That’s my arm in the picture. I scratched it.

I didn’t scratch it much, because as soon as I did, I started to bleed.  But it did itch, so I rubbed it and you see the result.

People with Lupus bruise easily. And I mean, easily. That’s my other arm on the left. I know the patches don’t look like bruises, but that’s what they are.

The picture on the right was taken this morning, twelve hours later. You can see the bruises changing color. 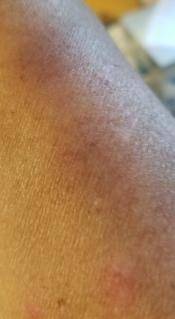 What you can’t see is the bruises on my legs, but there are many of them.

Now did I bump into anything? I didn’t.  Let’s say a mosquito lands on me. If I swat it, I will get a bruise.

I don’t think about this and odd as this may sound, it was last night that I realized what was happening.  It’s not that I don’t see the bruises. I do see the bruises! Other people see the bruises, ‘What happened to your legs?”

Occasionally, I’ll have a giant bruise. I recall having one the left side of my back, right above my hip. “Look at this thing!” I told my husband.

“No clue,” I said.  Because guess what? Nothing and no one hit me.

As it turns out, I might grab the waist of my shorts to pull them up or down. If I scrape my skin, there will be a bruise.

So how does this fit with the transit? What would you think if you saw a woman covered in bruises? That someone must be throwing her around, maybe. Grabbing and restraining her? Hitting her with something. It never occurred to me, my legs look like I’ve been beaten with a cane.

I have to say something at this point.  This is for people who have been tracking this from the beginning.

I really have wound up quite isolated and suffering and pitiful if you knew my actual circumstances.  It turns out these dire interpretations have at least some merit.

Luckily, I can transcend pain and many other torments.  I’m actually having a very good day.   And I’m nearing the end of the transit. And Jupiter will join Pluto (and Saturn) in Capricorn, soon. This can only help.

So now I wonder if I should explain the bruises to people when I see them staring. I guess the answer to that is, yes.