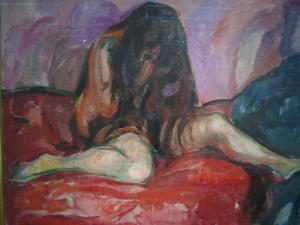 When you combine Saturn with Pluto or Scorpio with Capricorn, it is inevitable you come in contact with darkness and  despair. If these energies dominate your chart, it may be the path of least resistance.

With Pluto transiting Saturn-ruled Capricorn for the next decade this will become an issue for the collective. I am definitely seeing it all around me. It’s life threatening for people who are not used to dealing with these feelings.

I am used to dealing with these feelings and found myself telling a client who I have much in common with, that she would have to choose between gratitude and despair.

Saturn / Pluto invariably suffers much loss. If I don’t watch myself, I can really go swirling down in this pain.  I know that some of you know exactly what I mean.

I am drawn in that direction and sometimes I do indulge myself. But for the most part I try to be responsible and control (Saturn) my focus (Pluto). I try to focus on what I have going, what I can do for others, what I can do in the future and I try to keep in mind, there is always someone far worse off than me. I don’t have to look far to find them either.

I offer this as an alternative for people who are encountering true despair for the first time in their life or for others like my client who can  just plain benefit from having an alternative path defined.

You may feel intensely sad. But there is always something to be grateful for, always.