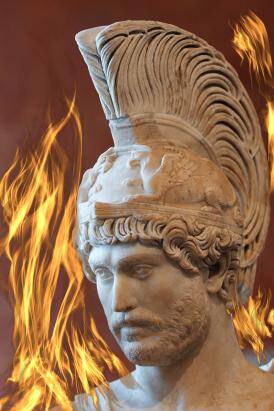 Mars – planet of strength, power, and war. Mars is aggression incarnate. He is the burning fire that drives us all forward. And when we think of Mars, we naturally think of the first house. After all, Mars is the tip of the spear, and the first house is where it all begins. But in traditional astrology, Mars is said to rejoice in the sixth house. So what is the connection?

In traditional astrology, the sixth house is known as the House of Bad Fortune. It is the place where all of life’s debris piles up. It is the house of papercuts and dirty dishes, of overwhelming workloads and burning the candle at both ends, of bad bosses and painful illness. It’s where we’re reminded, as Dorothy said on the Golden Girls, “Life is full of crappy stuff to do.”

It’s important to remember that, as vital and necessary as Mars is, it is also a malefic. Even in myth, Mars arrives on the battlefield along with the personifications of fear, panic, discord, and bloodshed. In hymns, Mars is said to delight in gore and things that embitter human life. Mars is not always a fun guy to hang out with. And so it makes sense that he finds his joy in the house that does, in fact, embitter life. Mars likes it best when the going gets tough, and it’s rarely tougher than in the sixth house.

However, Mars is more than just a bringer of chaos. He is often associated with smithing, and in this sense, we can call the sixth house a forge. It’s easy to be a good person when everything is going well. It’s easy to be generous when you have more than enough. It’s easy to be kind when the world is kind to you. But it’s the moments when our fortune disappears, our health fails, and our lives become crunched with pain that we really prove who we are. The way that we choose to respond to misfortune is what builds true character. The forge is hot and sweaty, the anvil coarse and rough, and the hammer a shattering force. But we come out of it refined, honed, and sharpened. . We become a weapon.

Or not. What is less known is that Mars also has agricultural associations in his myth. In his Orphic Hymn, he is even implored to give Ceres (goddess of the harvest, among other things) the weapons of the field. And that is the real beauty. A forge doesn’t just make swords. It makes ploughs and shovels and rakes. It makes the tools with which we tend our personal crops. Remember that the sixth house is not only about sickness and pain, but it is also the house of the common people, the peasants, the farmers. Mars in the sixth reminds us that we grow what we put our blood, sweat, and tears into. And if it’s not worth the pain, it’s probably not worth growing.

Regardless of the sign he’s in, if Mars is in the sixth house, he’s going to be of prime importance in your life. Mars exalted in Capricorn will make you able to take anything that life throws at you and make it useful. You can’t be held back. But even if you have Mars in its fall in Cancer, you’ll still be able to fight to keep people together, making sure your little tribe weathers every one of life’s storms. You’ll know how to keep your cool and develop your grit even as you maintain your trademark compassion. Whatever sign Mars is the sixth house is found in, he will make you a finely-tuned machine.

Do you have Mars in the sixth house, or do you know someone who does? What is it like?