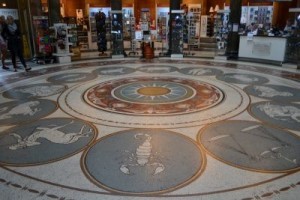 My sister and I have the same ascendant, with just 1 degree separating.   Because of this, out lives play out in tandem on a certain level.

As an example, our mother died with Saturn conjunct our joint midheaven. However I have planets conjunct my ascendant (she does not) and I have planets being hit by the Uranus Pluto square so my experiences are different from her as well as being the same or similar.

My husband’s son’s ascendant is also conjunct mine.  Our charts are freakishly similar and while we communicate a lot, there are times (like now) when we both go silent.  Currently, Saturn is conjunct our joint midheaven and the Uranus Pluto square is transiting our planets in Libra so I have a pretty good idea why he’s out of pocket…and we’ll wind up coming back to life at the same time.

I know there are others around here who have their ascendant conjunct mine. There are also several people with children who are born very near the day my son was born and they can see the similarities in how these kids develop.

This is a terrific way to learn astrology, and to gain a deeper understanding of the cycles we all go through. I think it teaches a person to be kind, because if it’s not your turn now, it will be eventually.  You see a person struggle with a Saturn transit through their 12th house, for example. You may be dozen years off from your own Saturn transit through the 12th, but those years fly by and all the sudden it’s upon you.  I heard someone bashing a woman in menopause the other day, as if their turn will never come. ::laughs::

If you do know someone with their ascendant conjunct your own, you have found a person who is on a similar path as your own, at a similar time. This is a way to connect with other people, regardless of their age, which is another facet to this. During Saturn’s transit though our 9th house, my sister, my stepson and I all defined (Saturn) our beliefs (9th). What we believe is irrelevant, we all went through this process at the same time which made us peers in this underlying way.

Do you know anyone who has their ascendant conjunct your own? What have you observed?