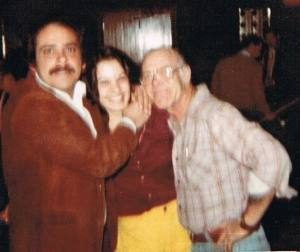 That’s Jim on the left, my surrogate dad and the man who vouched for me and got me the job. We met and hit it off so quick your head would spin.  He was the perfect father for an Italian girl.

I met him when I was 15 and he immediately took over as my dad, helping me to get a driver’s license, loaning me his truck and at times even letting me drive his corvette.

He has many dozens of claims to fame. For example, once he met my boyfriend, Scott came over to pick me up for a date. Jim met him at the door and told him he could not go out with me in “that piece of shit car”.  Yeah, he told him come back with a decent car and to get some flowers while he was at.  “Ya stupid dipshit!” he yelled as he slammed the door.

He made such an impression, Scott came around on the old blog some 30 years later and wrote his account of the episode.  He was quite put off about the whole thing but did show up in mother’s car, flowers in hand the next time he came over.

The guy on the right is, John Neil.  I use his whole name because he was his whole name.  He was never, John, always John Neil and he was an ex-military guy for sure, Marines I think. He had a tattoo on his forearm but I knew little of the military in spite of having lived with the soldier for 2 years prior to this. It was just out of my realm having grown up the way I did.

You notice the yellow pants. I had then when I was with the soldier so he could not have been too far gone by then, maybe a year? I think I am 20 there but in any case I got those pants from Goodwill of course, they were just sitting there along with a red pair, same cut and style. They looked brand new so I bought both pairs and wore them on alternate days until they wore  out, I guess. In whatever case the soldier remembered them more then 2 decades later.

In 2005, I flew across the country to see the soldier after 25 years and I wrote about it on my blog (Ugly Pants Across America). Being secretive I did not say where I was going or why but I did say I was wearing ugly pants to travel and this gal (I think I remember who but  not sure) left a comment that was quite startlingly honest.

She said she just could not fathom traveling in ugly pants. I had to laugh because I would not have been able to fathom it either had I not been the one doing it but the fact is my ugly pants were YELLOW so you see it was worthwhile.

Because when I got to the airport and the soldier spotted me coming down on the escalator, I had on these bright yellow pants and you know.  This is the stuff movies are made of.

I bought the pants on ebay, by the way so they were also new/used.  This was satori’s idea and she had it very late in the game. I mean there was a time crunch and to have this work, well it would just have to work so I searched,  found bright yellow pants in my size, bid on them, bought them and they arrived one day before I was flying out.

Too bad the zipper broke when I was dressing to leave that morning but by then I was in too deep. I was wearing those pants come hell or high water so I pinned the zipper and went to the airport where I solicited a stranger to snap my pic on them.  Er… otherwise who would believe me, see?

“How are you?” asked the obvious Sagittarian in the airport.

“I’m feeling great in these yellow pants, do you think you could take my picture?” 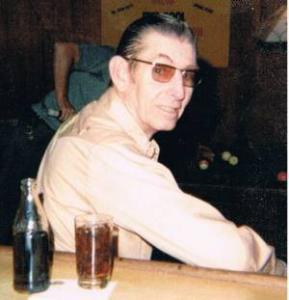 This is Paul. Paul was old as hell. He was really damned old and you notice he is drinking a soda. That is a Tab, specifically, that was all he could drink.

Paul was famous for fighting in wars, he was a hero and did not come to the bar often but he did come.  His daughter would pick him up at home, drive him over and then  help him from the car to the front door of the bar. As soon as someone saw him, the guys would go over and take his arm and help him to a stool, his daughter would take off and then come get him in an hour or so.

During that time we all yelled at him, “HOW YA DOIN’ PAUL?”  He’d smile and say he was doing, damned fine.  He’d say how good it was to see us, how he hated being stuck at home.

Paul would have 2 Tabs (50 cents each) while we all told our jokes extra LOUD so he could hear them and then tip me 50 cents and that would be that until the next time.

I hope you liked meeting some of the people who helped me form. You would be amazed how often I think them. Almost every day.