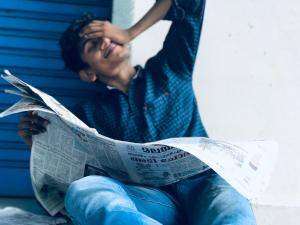 I’m driven to think but it’s hard to do at this time due to the firehose spray of misinformation that we’re inundated with hour by hour, day in and day out.  I’ve looked for tricky ways to help me discern. See: Truth Floating In A Sea Of Lies.

I’ve been successful but it’s nowhere near sufficient, meaning the clarity I can achieve is limited. This sounds like Saturn Neptune / Saturn in Pisces to me!

One way people deal with the tsunami of lies and utterly ridiculous made-up stuff, is they split it up, roughly, into two “seas”. It’s a logical thing to do.  No one case parse everything. Reduce the pile you have to sort by half seems an intelligent thing to do.

The criteria an individual uses to sort information may have some unique features but for most people there is a hard line (block) in place.  For example, some people believe the news. Other people believe absolutely nothing put forth by the known news outlets.

Regardless of what you think of either position, you can see the method is effective in reducing the work load.  “I am not listening to anyone who *insert description here*.

This might work if not for the fact, people mix lies with truth.
It might work if the “independent reporter” was not actually funded by the side you’re not going to listen to.
It might work if we hadn’t seen large numbers of people we’ve trusted, revealed to be untrustworthy.

My sorting criteria is unusual. I know it’s flawed so I adapt it nearly every day based on what I learned the day before. This may sound crazy to Fixed signs but I’m Mutable as is the sky at this time. Mars in Gemini. Yes, I thought that but it’s forty minutes later and I’ve adapted and updated.

This is related: Why Some People Can Figure Things Out And Other People Never Will

I’m posting this to ask people how they are coping with the current state of facts.

Do you have sorting criteria? Do you feel it’s effective? Do you have tips for others?  Or have you perhaps, simply given up?