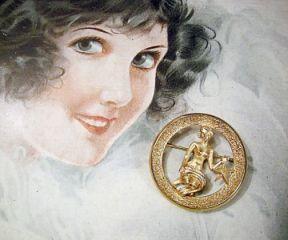 I have natal Mercury in Virgo. It is the final dispositor of my chart, which means that every single planet is ruled by a planet that is ruled by Mercury. Everything in my chart is funneled through my Mercury in Virgo mind. Long ago I came up with 2 different analogies for my relentless thinking, and I came up with them late at night, lying in bed, trying to shut my mind OFF. One was the “OMG, my team of horses (thoughts) have taken the bits in their mouths and are running away!” Ever see a team of horses that have total control of the cart? Driver’s sitting up there screaming WHOA, STOP!!! while the horses are heading towards a cliff? The “cliff” is a disaster scenario that my thoughts are trying to convince me is a real upcoming potential. Next thing you know, my pulse is racing and I’m up and pacing the floor. The team jumped into the chasm. These thoughts usually involved my children, and fears about them.

The other analogy is less panic-inducing, but still super annoying. It’s the Hamster Wheel. Over and over and over and over replaying the same scene in my mind, like somehow it’s going to be changed if I think about it long enough. Example: Under a Neptune transit to my natal Mars, I discovered the magic of dancing and live music. At the time, where I lived, there was a live cover band to be found 6 nights a week within a mile from my home. Ah, those were the days. Anyway, I became addicted to dancing. I didn’t need a partner, all I needed was a lemon drop martini and I was out on the dance floor. Perfect Neptune/Mars!!

But when I came home, exhausted, and tried to sleep, my Virgo Mercury would come out and torture me. How dare I be audacious enough to go onto a dance floor by myself and DANCE LIKE NO ONE WAS WATCHING? Over and over and over, my mind relentlessly replayed scenes of me happily and unabashedly and Neptunily dancing. And criticized every single move. I would literally writhe and cringe in bed.

You’d never know it in the light of day, when other things distracted my mind. But in the dark, out came the hamster.

To take control back from the team of horses, to kick the hamster off the wheel, required nothing short of absolute steely determination. I found it under a Saturn transit. Saturn squaring my Mercury forced so many depressive, obsessive thoughts that I absolutely had to regain control or there was going to be dangerous repercussions to my psyche! I learned how to control my breathing, which in turn eventually controlled my thoughts. Who would have thunk it? But it helped me. I still have the hamster visit; the team of horses still try to take the bit. But I don’t become paralyzed and mesmerized by the thoughts as often. When I recognize the body signals of being terrified by my thoughts, I slow my breath down…. way down.

I’m not perfect, I still go to “crazy land” every once in awhile, but the last time it happened, a true crisis was afoot and anybody in his RIGHT mind would have had some run-away thoughts. But the breathing truly helps.

Do you have a hamster rattling around in a wheel at night? What do you do to quiet the little bugger?