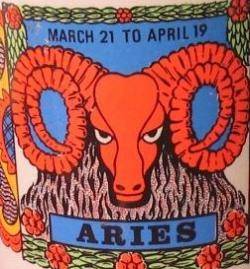 With Mars touring Aries, recently one of the soldier’s friends hit on him out of the blue sky. She sent him a text that basically said, “the next time I see you it’s going to be this, this and this…” This was to his great shock and distress considering he wasn’t interested.

He’s known the gal for more than 5 years and although he appreciates their friendship he has never gave her any indication of being interested in anything else. Besides his lack of attraction she holds a very elevated position in their town and though they are intellectually compatible, he feels that socially a relationship between them would be impossible. They are both very smart and both very Catholic but other than that, they have nothing in common.

“She goes to dinner parties,” he said. “That’s the kind of thing she does. What was she thinking? I don’t see how she could entertain an idea like this… at all. What’s she going to do? Take me to a dinner party?” he laughed. “I don’t go to dinner parties! I don’t like them. In fact I have only been to one in my entire life and it didn’t go so well,” he said.

“What happened? Well I wound up kicking a guy’s ass for one thing,” he said. “Kicked it but good, too.”

“Yeah. That’s what happens when I go to dinner parties. People get their ass kicked, P. I’m just not cut out for it. Like I want to sit around and listen to people talk about how smart they are and how great they are when they are neither smart nor great! I’m not going to do that. That one time was the first and last dinner party of my life. The very next day I went straight to (forgot the military name) and told them to put in Special Forces and do it right now this minute. I wasn’t going to think about it anymore. I was going. I could see I was just not cut out… I wasn’t made for anything else.”

“So anyway I just don’t know what she could have been thinking. I don’t understand how she could be as smart as she is and go and do something this stupid.”

“What did you write back?”

What do you think about relationships across social classes? Can these gulfs be bridged?