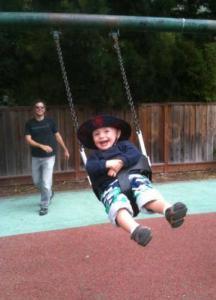 He is REALLY freaking me out

A combination that doesn’t get much attention in synastry is Jupiter and Chiron. Jupiter is the planet of joy, optimism, expansion, and opportunity, while Chiron is the wounded healer, the place where we perennially ache, and through that find our own strength. Not exactly an intuitive duo, is it? So what happens when the two meet?

Have you ever, as an adult, watched a child playing and felt that bittersweet pain as you looked wistfully upon their innocence, swept up in the beauty and your own nostalgia for days gone by? That pain as you realize your carefree days are behind you mixed with the sweetness and hope as you think about the way their future stretches endlessly before them? That is how the Chiron person feels.

Now switch to your memories as a child, happily playing on your swing set, hurling yourself higher and higher and shrieking with delight as you jump, soaring through the air, where you catch a glimpse of an adult, watching you meaningfully with tears in their eyes. Er, what? You drop back to earth with a thud. That’s what it’s like to be the Jupiter person.

There can be a lot of frustration on both sides. No one likes to be reminded of their wounds while they laugh with their partner, and no one is comfortable knowing their joy somehow brings their partner pain. There can be a definite wet blanket effect as the Jupiter person tries to make themselves smaller to ease the Chiron person’s suffering and the Chiron person tries, usually unsuccessfully, to mask their discomfort.

So how do you make this work? Well, there are a number of ways, but for this post, let’s point out that there’s another side to each. Jupiter also rules teaching, as well as perspective. And Chiron, remember, is ultimately where we find our power. The Jupiter person can help the Chiron person look at things differently and teach them to see that their own future is also limitless and free. Through this, Chiron achieves the healing it is destined for and can confer this wisdom to others. And Jupiter achieves its own higher purpose, which is not just to enjoy but to expand and grow. Once this happens, the couple can share their joy, which will be even sweeter due to the shared meaning behind it.

How easy this is to achieve relies on a number of factors, including the aspect Jupiter and Chiron make (a trine or sextile is going to be easier to integrate than a square or opposition), each person’s chart as a whole, what the rest of the composite chart looks like, as well as each person’s willingness to make it work. No one factor guarantees success, but there are no guaranteed failures either.

So if you and your partner have this combination, take heart. Go out and play together, talk about your dreams and make big plans. Show each other how beautiful life can be, and you’ll create a future that is brighter than you can imagine.

Do you and your partner have Jupiter/Chiron? How have you experienced this aspect?