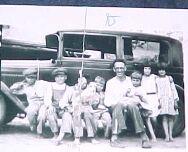 “… One thing that my description does not say is that I am fond of children. In fact, I am beginning to think that it is my most marked characteristic. Wherever I go I am surrounded by a group of children. I love them at all ages and have been told that I am a teacher of children in the new age…”

“I hear Christine XXXXXX is in an institution. She did act funny at the space convention in LA in July. That was the last time I saw her. Zip [Zipporah Dobyns] says that she is under the wrong astrological signs and they will continue to be unfavorable for three years.”

“Ever since I returned from Nogales I have been wanting to write you but this is the first opportunity that has come. Don’t think I have ever been so busy in all my life. Sometimes I think that I made a mistake starting this house because I just have too many other things to do. It seems that I am always attempting to do too many things. I promise people to do things and then being a Capricorn, I just can’t let them down…”

“I have always been a conscientious person and moral responsibility rests heavily upon me. As a senior in college I had this quotation put under my picture in the Senior Annual: “One life – a little gem of time between two eternities; no second chance to us forever more.” (Now that I believe in reincarnation I guess the second part of that is obsolete)”

“…I am sure I would like the doctor you went to. He told you the same thing I would have told you. When one’s mind is upset, it is bound to affect the physical body….”

Re: Zip Dobyns, Henry liked astrology but found the study complex and daunting. He said he didn’t think he was smart enough to learn it, however he felt my sister and I might fare better. She was 10 and I was 8. He bought us some books and the rest is history.

skip to Henry: His Living Fences, an interlude