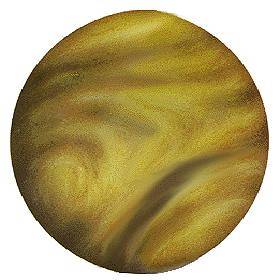 Venus’s exaltation in late Pisces reminds us symbolically of the exaltation of the Sun in Aries – the fact that Venus is ‘lifted up’ before the Sun gives us an idea of the relationship between these two. Remember we theorized that the Sun’s exaltation has to do with the first seeds of spring. Venus follows the cycle of the Sun very closely, being the second of two planets closer to the Sun than Earth and thus always very close zodiacally to the Sun. In the late degrees of Pisces, Venus is beginning to grow in influence again, and we can see an example very clearly in the natural world, in the form of ‘mating season.’ Venus rules eros, beauty – think of birds awakening from winter, courting and nesting.

Venus, like Mercury, has two modes of conjunction with the Sun – inferior (between the Sun and Earth), when she is moving slowest, and superior (on the far side of the Sun), when she reaches her top speed. Venus’s maximum elongation (angular distance from the Sun) is ~45 degrees, after which, depending on where she is in her cycle, her speed either accelerates, if she is approaching her superior conjunction, or slows, if she is nearing her inferior conjunction.

Starting from Venus’s preferred domicile in feminine Taurus, Venus is exalted a dexter sextile away in Pisces, the same angle she takes from the nocturnal luminary, the Moon (and the Moon, remember, is exalted in Taurus). Dexter aspects (literally meaning ‘to the right’) are indicative of domination and strength over another. Venus casting her aspect to Pisces illustrates her strength here – the lesser benefic in the feminine home of the greater benefic, Jupiter – thus Venus’s exaltation and fall scheme seems to arise due to her relationship with this greater benefic. Venus’s fall is in Virgo, opposite to her exaltation in Pisces, where Jupiter also finds his detriment. The contained and measured intellect of Virgo is not Venus’s favorite environment, as she does not naturally play well with the idea of ‘limits’. (This is not to deny the many contexts in which a Virgo Venus is a tremendous asset). In terms of elements, Venus is also temperately cold and moist, and so cold & wet Pisces is more appealing to her than drier Virgo.

Her detriment in Aries comes from the opposition this sign makes to her domicile in Libra; her detriment in Scorpio comes from the opposition to Taurus. Interestingly, both of the signs of Venus’s detriment are traditionally ruled by Mars. Aries is hot and dry, the opposite to Venus’s temperate cold moisture, so it is clear why she is not well-placed here. Scorpio, on the other hand, being a water sign, shares a cold and wet nature with Pisces, so it is the sign ruler here that makes the difference: Scorpio’s rulership by Mars is less suited to Venus’s nature than Jupiter’s rulership in Pisces.

Venus, with her peace-loving nature, is also naturally opposed to the conflict that Mars represents. Venus is interested in ease and pleasure and will benefit where she is able to express fully her bountiful nature. Mars isn’t really a ‘stop and smell the roses’ kind of planet, so the sensuality of Venus is blunted in the signs he rules. Jupiter, on the other hand, encourages Venus’s indulgence by expanding and, in some cases, treating it religiously. Venus in Pisces may be the type of person who lives their life as if they were an actor in a movie, for instance. Material indulgence may also be indicated, but a Venus Pisces native without much cash to burn may compensate with a vivid fantasy life. The imagination is holographic in a way, with conjured images blended with the real-time background. In some cases this may go overboard – if we cannot distinguish fantasy from reality, we live forever in the shadows. If we learn to distinguish the two, we have a chance at transmuting our desire into actuality. Doesn’t that sound so much better?