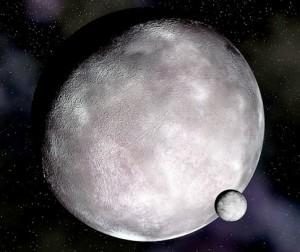 “Until you make the unconscious conscious it will direct your life and you will call it fate.”
— C.G. Jung

Eris (ee-ris) is a dwarf planet farther away from the sun than Pluto. Its revolution around the horoscope is even longer than Pluto’s. Because of this, everyone alive today has Eris in Aries or Pisces. With such a slow-moving planet the focus in interpretation will be on house position and aspects to quick-moving planets as everything else will be generational. Its sign association is yet to be named, though I’ve seen Libra and Virgo mentioned. It seems pretty Scorpionic in my estimation.

The mythical Eris, the namesake, is the goddess of Strife and Discord and the sister of Aries (Mars). She threw the golden apple that resulted in the War of Troy. Most of us are more familiar with the story of Sleeping Beauty which is a derivation of this basic archetypal character. To put it simply, she is the Bad Fairy at the Christening, a female representation of negativity and the disowned shadow which comes around to bite one on the butt.

Shine a light on Eris in your chart. Invite her to the party and you’ll get a better gift than if she shows up uninvited and PISSED.

Where is Eris in your chart? Do you embrace the shadow in this area of your life?