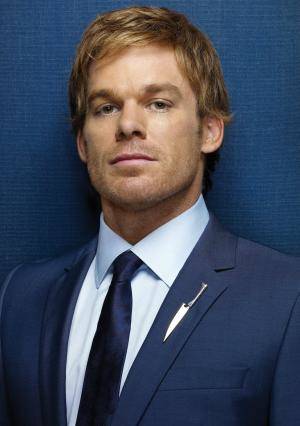 I am now watching the entire season of Dexter for the 2nd time. I was late into the game; my daughter had told me about the show years ago, but it just didn’t seem like something I was into…. What was I, crazy? Scorpio Moon me looooves that psychopathic blood-splatter analyst stuff. But the man himself, the actor… is what really intrigues me. So off I go to the Astrology of it.

Oh yeah, his name is Michael Hall. AKA “he who maketh me drool”.

Aquarius Sun… in the 12th house…. Trined by it’s ruler, Uranus! No wonder he does so well playing his cards close to his chest on the show. His face has that totally detached-from-emotion look to it….and it serves him well!! I thought for sure I’d find *something* scorpionic about his chart, but aside from the Pluto/Venus square (which plays out in his personal life, big time), nothing would give any indication that he himself finds blood spatter intriguing, or, for that matter, playing an undertaker as he did in Six Feet Under. In fact, with all the fire in his chart, I doubt he’d give death and its accoutrements a second thought, there are too many interesting fires to put out, dragons to slay and damsels to rescue! That is one incredible 9th house he has. I would venture to guess that in his personal life, all that fire, especially the very-late-degree Aries Moon, makes him quite the spontaneous lover. He’s been married twice, once to the co-star who plays his sister, but both marriages seemed impetuous given that they didn’t last long- the second one barely a year. 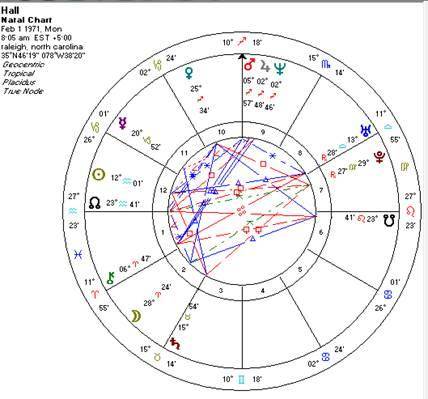 I find his nodal axis fascinating. A 6th house South Node, with the ruler in the same house as the North Node… talk about a conundrum! I get the feeling he’s played fast-and-loose with partners before, and in this lifetime, when he is less than completely honest, there’s a 2×4 served upside the head, compliments of the square to Saturn to his Sun, ruler of his South Node. Pluto square Venus gives him many opportunities to learn lessons of manipulation as well. The stellium in Sadge, in the 9th house tells me that he probably has a very natural way of stretching the truth when it comes to what he’s doing. His charity work puts him on the right track for a 12th house North Node, and a really great use of that Sadge stellium would be philanthropy!

In very early 2010 it was announced that he was undergoing treatment for Hodgkin’s Lymphoma, which might also be tied to that 6th house South Node. At that time, Uranus was at 25 Pisces, opposing Pluto and squaring his Venus. By the middle of the year, he and his 2nd wife had separated. Tellingly, Neptune and Chiron were traveling together, right on his North Node/Ascendant, which I think accounts for the health issue.

The man’s got brains, though. He co-produced Dexter, and has that great Saturn/Mercury trine, assuring him that those things that he really puts his mind to, and works towards, will be successful.

He got married again for the 3rd time a year ago, after Neptune had finished squaring his Sadge stellium in the 9th. I’m glad that had passed by, otherwise I’d be prone to thinking he was not in his right mind. Hopefully the 3rd time is the charm!

What do you see?