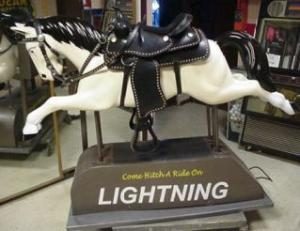 I have a friend who is associated with a man who finds women everywhere he goes. He finds mother substitutes, specifically and it’s just uncanny. He finds these women (or they find him) and they pretty much form a line waiting to meet this man’s needs.here is nothing you can do about something like this outside of observe it and people do. The women don’t compete. Instead they remark to each other, “Look at how many mothers he has…” The man is in his 40’s and in whatever case I told her this story…

When my daughter was a baby, about 3 years old she used to like to ride on those mechanical grocery store ponies. Around here, they cost a penny which I think it pretty cool. One cent and you can actually buy something worth having.

So one day, after paying for my groceries we headed over to the pony per our ritual and found the pony occupied. There was a little boy on the pony… dark haired, grinning and seriously over-fed. You know. This was a well-loved kid if you know what I mean. A lot of people do this with their first baby. They spoil them. And this boy in particular was from a culture where boys are revered, girls not so much.

So anyway, this kid was on the pony and he was happy. His mother was clapping for him enthusiastically to say the least. They made quite a pair these two, and then the pony stopped. Uh oh!

The kid started screaming his head off. The mother looked at me and I kept a blank face because it’s none of my business. She shrugged and put another penny in the pony, making a point to focus on this little boy… her little prince, clapping and cooing and so forth. It was her body language, see? She turned slightly so my daughter and I were obliterated from her reality.

Never mind my daughter and I were waiting… maybe our ice cream is melting in the grocery bags I was holding, we were going to stand there and wait while these two had their… thing.

No crying this time. He had his mother trained.  All this kid had to do is look at her expectantly and next thing you know, she had another penny and she was putting it in the pony and I just couldn’t believe it.

“This is ridiculous,” I said to my daughter. “Something is wrong here. These people are never going to get off this pony. Sorry, babe but let’s get out of here. You’ll have to ride next time.”

The mother acted like she was so involved with her son she couldn’t hear me even though I was standing 3 feet from her. She didn’t so much as look over her shoulder.

Little boys with mothers like that, grow up and become like this man my friend knows. They are so profoundly crippled because the pennies just keep coming. And this is what I mean, every blessing is a curse in exact proportion (and vice versa).

Because as far as I am concerned this man and that little boy on the pony are the same person. The 40 year old boy does nothing but wait for various women to deliver whatever he needs… with bells on. And when one goes away there are three more waiting. Actually, there are ten more waiting. This kind of ease is invariably shown and promised in a natal chart.

I guess this is why they say Saturn / Capricorn / difficulty builds character. Because if every time you put your hand out, someone fills it for you without a second of delay, you wind up something akin to an amoeba. You just don’t form or become an adult.

Do you know any adults whose development is completely arrested like this? And how would you have handled the pony ride situation?