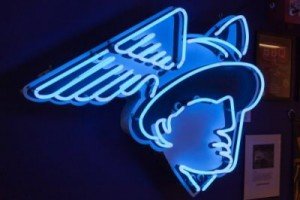 My fiancé and I are getting married in June… I would like to be able to understand the specifics of our communication styles better and maybe how that interplays or interacts with any fated-ness or karmic stuff in our charts. Obviously being a Gemini, I tend to be a little more on the over-communicative side, while he, a Scorpio, tends to be more in the keeping-things-to-himself camp. But my Mercury is in Taurus, which slows (and frustrates) me a bit and his is in Libra, which opens him up a bit, but more-so just makes him agree with whatever I say a lot of the time. Frustrating?

Dear S: Thanks for submitting your question!

Here are your charts, as well as your synastry grid. Your planets are across, his are down.

See how your Pluto sits on his 12th house Moon and 1st house Saturn/Mercury? Dude’s kinda afraid of you. Or, I should say, afraid of your intensity. Anyone’s Pluto falling close to your Ascendant would do this, but his 12th house Moon really needs to be able to run and hide without being chased down. He’s got Saturn/Mercury on the Ascendant in Libra… he really needs to express himself in his own time, and with your Pluto on these planets, it’s triggering some of his deepest fears. I know you aren’t doing this deliberately, but it’s how he may be experiencing it. This isn’t a bad thing- your intensity- it just means that you have to understand that he is moderating his responses to you because he doesn’t want to start any arguments. You have a tight Mars/Sun opposition with him, so he’s a little afraid if he truly exposes who he is to you, it’ll upset you. There are other indicators in the synastry that tell me that he believes that you think you’re right, and he may not see the issues as worth arguing about!

The fact that his Saturn makes incredibly good aspects to your Sun and Jupiter, and your Saturn trines his Venus, gives the potential for you two to go the distance. He thinks you’re his ideal woman (his Venus on your Neptune) and he really wants to please you! Plus, his Jupiter trines your Sun. He likes you, too (I think that’s important, that partners like each other as well as love each other, because sometimes when times get rough, the fact that you still really like it each means everything.) And, you’ve got the coveted Mars/Venus trine…. so there are many, many good aspects between you, please focus on that, and remember it when your Pluto is wanting to crawl into his head and figure him out.

So my next question would be: can you be pleased with his simple self? I want to say a little about your Mercury in Taurus; it’s at a degree that can signify your thoughts can dig in and become your own worst enemy… you can literally lose your head when your thoughts run rampant. There’s a lot of fixed planets in your chart, which means that if you think you’re right about something, you may have a hard time seeing another side. And his Libra stellium will always find the other side. He’s a Scorpio, yes, but with only the Sun in Scorp, at the first degree, he’s a baby Scorpio, with a whole lot of Libra backing him up. I really get the feeling that he needs to be able to keep some of his thoughts to himself, and if your relationship is to go the distance, you have to become comfortable with that.

In a personal consult, I would ask you to talk to me about your t-square of Neptune/Moon/Jupiter/Sun because I think Neptune can really bring out free-floating anxieties in people. Your anxieties may come out when he clams up… but really, it’s more about your own internal processes than it is about him keeping “secrets”. I think a Scorpio and a Gemini can work out just fine, especially given all the air he has in his chart. Then I also look at each individual’s Saturn, the sign and placement, because that shows great vulnerability. I think the Saturns in this chart are bang-on – his falls on his Ascendant in Libra, giving him great caution in self-expression; yours falls in Leo, where there may a fear of not being loved enough, and when he clams up, you fear he is thinking things that could potentially hurt you. With all your Taurus planets falling in his 7th, and everything I mentioned before, I gotta tell you, he love you LONG time!!

Oh, and as far as karma/dharma stuff…. his Libra Jupiter sits on your North Node. He’s your teacher. I have South Node in Aries myself… I know this may be hard to hear for your independent-loving self. But he’s here to show you how to see the other side!!

I hope this helps!