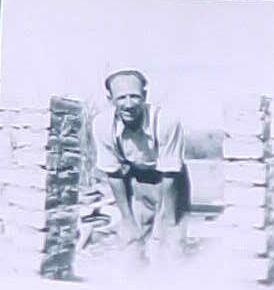 Speaking of Saturn Neptune and adobe houses, if you live in the desert and you want to build one, you have to be fairly quick about it. Because mud is mud. And July through September is the rainy season… the monsoons as they’re called and heavy rain is anathema to a mud block house, up until you get the stucco on.

A little bit of rain can be dealt with. Knowing a storm is coming you can cover the tops of the walls with empty (waterproof) cement bags which are saved for this purpose.

And even it the bags blow off and the top layer gets saturated, nobody is happy but it’s not the end of the world because you can just scrap the last row of blocks that were laid, regroup and keep on building.

So my family built our house in the desert under Henry’s supervision one year and it was roughly 80% complete towards the end of the spring when an early storm came. And man did it rain.

Yeah. We had maybe one more weekend before we’d have been putting the roof on and now there was no house there! And it’s sort of funny. “Man plans and God laughs.”

I thought it was funny anyway. But I’m a Saturn Neptune type. And I didn’t want to move to the stinkin’ desert anyway! To hell with the desert. What do I want with the middle of nowhere?

So my father was all pissed off. Henry was philosophical, my sister was pissed off (she hated her hands in the mud and we were going to have to start over). My brother was depressed, my mother detached… See what I mean? This is funny if you’re me and recording everything.

How do you think you’d react to this?
Can you see a correlation between this story and what is happening in your life right now? Has all your work (Saturn) been for nothing (Neptune) for reasons outside your control?