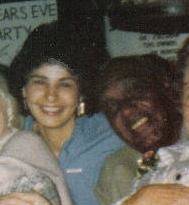 So anyway, I met LB every morning and started bringing breakfast in for us. I’d bring a muffin or something that could be heated in the toaster oven which was all that was available. LB would brew coffee a few minutes before I got there and we’d post up to eat and laugh and listen to Devo’s “Whip It” on the jukebox. I don’t think there is a funnier song on the planet. We both thought that song was stupid and we’d play it each day just to laugh ourselves into oblivion. And the one day it was pouring rain.

It was cold too. It was winter. And all I had was a motorcycle so I drove it year round. It doesn’t rain that much in the desert but when it does, it stings when you drive through it on a motorcycle, never mind you get drenched. Eventually I got smart and tucked a change of clothes into my clothes, because I would get to work with my teeth chattering, frozen stiff.

Rainy season, LB would be waiting at the door to usher me in. It was his idea; I bring my bike into the bar on rainy days so I didn’t have to get off work and have it not start or something. He also didn’t want me to have to sit in water, seat soaked in the rain.

“That’s a good machine you have there. You should take care of it,” he said.

It wasn’t that often, but on rainy days I would pull the bike inside the bar and park it by the jukebox. I’d get to ride it through the bar when I go off work which is kind of cool if you think about it. I’d weave through the pool tables, being seen.

So on this day, I pulled into the parking lot drenched, and drove up to the bar. I had stop to lift the bike onto the concrete slab in front and then over the threshold of the front door. No problem.

Once inside, I drove it to its spot by the jukebox and then something happened, but I have no idea what. Instead of stopping the way I always had before, I kept going and I hit the stage at the edge of the dance floor with my front tire which popped up and then CRASH! I laid down my bike. First time. Only time.

But it was worse. The gas cap popped off and the tank emptied onto the floor. It just gurgled and poured out, a full tank. Two gallons I think, spreading in a pool.

LB did a little snicker, but I was mortified. OH CRAP. What have I done?

“I’ll get my mop,” he said. He was smiling. He opened his mouth to say something else but changed his mind and just chuckled. He walked into the back room as I turned beet red from embarrassment and started stammering and making excuses.

Basically, I babbled but LB was eighty-something. What the hell did he care? He didn’t.

“This is no problem Elsa. I had that floor clean but I’ve been mopping this floor for forty years. One more time isn’t going to kill me. Besides. I believe it’s worth it just to see the look on your face.”

I was speechless. Well almost. “I’ll clean it up,” I said.

He shook his head with a big smile. “No you won’t. This is my job.” He tried not to laugh at me because I really was traumatized. “You take care of your bike. Pick it up. Put it in Judy’s office.”

“Well you don’t want people to find out your drove it into the stage do you?”

“Put it back there. Do you need help, or can you lift it? This’ll be between you and me. If anyone asks where your bike is, tell them you left it home. Tell them I drove you today because it’s rainin’ out. Tell them it’s none of their business.”

I picked up the bike. I was listening.

“Then when you get off work, go back to Judy’s office, get on your bike and go out the back door instead of the front. No one will know,” he laughed. “But you best go straight to the gas station. I think you need some gas.”

That did it. He could no longer hold it. He stopped to laugh and laugh, and laugh. So I laughed with him. What the hell?

“Do you think you can make it to the station? Those things don’t use much gas do they? $1 a week, you say? I don’t know what gas you’ve got left. Maybe just fumes. When I get this mopped up, I’ll be done cleaning and I can go get you a gallon. I have a can in my car.”

He smiled. “Okay, Elsa. I believe you will.”

“I believe that too.”

He swiped his mop through the pool of gas and rainbows appeared. 15 minutes later, the bar opened and the drunks arrived.

The gas was gone. The bike was gone. It’s stashed in the back room, but the SMELL. Ohhhhhhhh man, the smell…

One of the customers asked, “What is that? Smells like gasoline.”

LB saids, “What smell?” and I laughed.

“That smell! That fuckin’ gas smell. Can’t you smell that?”

“No. I don’t believe I can,” LB said. “Gas? I don’t smell any gas. I’m using some new cleaner on the floor. Maybe that’s what you smell.”

“Well it smells just like the regular cleaner I use on the floor, everyday, to me. I know what that stuff smells like.”

I beamed as LB winked at me, then left for home. The rest of the day, people came in. “Do I smell gas?”

“Nope. It’s cleaner,” I told them. “I sure hope they don’t keep using it. I hope LB goes back to the other, because this one smells like gas,” I said.

End of the day I got off work, went into the back room to count the register and then got on my bike and drove out the back door.

We were never found out.