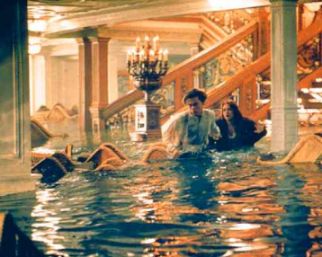 There is a terrific discussion around death on the Death/Suicide video. It made me think of the Titanic movie which I think most have seen.

I was extremely moved by the movie, never mind the manipulations or whatever flaws and cheesiness that might have been part and parcel of the film. Fact is it depicted a momentous event and I was easily swept into the size and scope and emotion of the movie never mind all that water. I especially liked the length of the movie because it allowed me to be lost for hours but here’s my question:

At the end of that movie the ship is going down and people react in various ways. Some wish to survive at all costs, some behave in a way that is heroic, etc. By far the coolest were the musicians who continued to play as the ship went down and I would like to say I would be one them but I would not.

There was a couple in that movie, who upon finding the ship was sinking, climbed into bed and held each other. I would without a doubt be one of them, however at the time I saw the movie I was alone. I had no lover so I cried extra hard. Seems a person like me very deeply desires a lover like that. So being a Venus Neptune type… I would clearly opt to drown, merged with my lover but what about you?

That ship is going down… there are not enough life boats. What are you going to do? Can you see our choice in your chart?