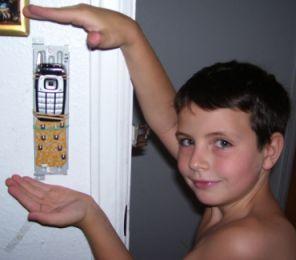 That’s my son in the picture. It was taken ten years ago. He’s a Taurus with his Sun conjunct Saturn. He has a Scorpio Mars. He was trying to keep his room off limits. The original post is here – Security Is A Specialty.

Prior to this, he managed to remove the bathroom doorknob (which had a lock) and trade it with the his bedroom doorknob, unbeknownst to me.  Operation completed, he attempted to manipulate me into accepting the situation. He was seven years old!

He’s a gamer of course and in high school he became involved in Cyber Patriot competitions.

Today, he’s eighteen years old. He’s a sophomore in college, earning straight A’s in computer engineering. I’ve been talking to him about hacker battle I’m involved in after discovering something new about myself. I have never liked video games but this cyber-war stuff really gets my blood pumping.

I think it’s because of what’s at stake.  This blog is my livelihood. I have invested heavily in it for fifteen years.  I’ve explained this to adults I know…

“Just imagine being in a battle on a computer…it’s your 401K at stake!”

People freak at that, but that’s what I’ve been dealing with here, recently.  And my son?

He values COLLEGE. He really loves it.

“Just imagine you’re in one of your video games but if you lose, you lose COLLEGE!  That’s right. The person you’re battling is trying to destroy everything you have worked for all your life. They win, no college for you. Is your blood pumping, yet?”

His heart was pounding, I’m sure.

We have these things in common…a powerful Mars Mercury signature as well as a strong Saturn signature.

What gets your blood pumping? Where’s your Mars?