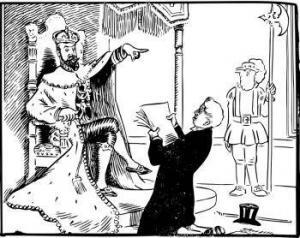 Remove yourself from my sight, peasant! You are not my One True Friend!

In my last post, Who Do You Trust?, Lakshmi made a comment that really got me thinking. In talking about faults she finds in potential friends, she mentions, “Example: a woman who seems friendly and interesting starts badmouthing another “friend” behind her back. I could overlook it or make allowances but my conclusion is, if she does that to her, she’ll do it to me.”

This is an excellent observation, and one I should have mentioned in my list! Because this is an incredibly common issue. People who are untrustworthy to others will probably be untrustworthy to us. But then I started wondering about those rare cases where it works differently. What do we do when someone is only kind to us?

I don’t mean that someone is an introvert and prefers the company of only a few people, or that they don’t make an effort to reach out to others. I mean the people who are rude to cashiers and servers, who see competition everywhere and despise anyone who might be a threat, or people who talk shit about everyone they meet.

I think most of us would assume they’ll do the exact same thing to us, but what if they don’t? What if they truly treat us well even when our backs are turned? How would you feel about trusting that person?

I have known a few people like this. One of my best friends in high school was a true terror to nearly everyone she met, swinging from sullen to standoffish to openly insulting. But I was her special person, and she treated me with so much love and respect. Being a mega-Scorpio, she was very selective about who she’d let in. And me being a young Leo who liked to feel special, I let this go on for quite a while. About a decade, in fact.

But as I grew, it became harder and harder to deal with. She alienated each new friend in my life. She embarrassed me in restaurants. My parents refused to be around her. I couldn’t invite her anywhere that other people might be. Eventually, the cost was just too much. I couldn’t watch the hurt in other people’s eyes when she lashed out. I couldn’t tolerate the anxiety and the impulse to rush in behind her and smooth things over. I couldn’t stand to see the destruction and suffering she left in her wake.

And so I had to end things. What surprised me was that she still treated me with kindness, even after the end. And who knows? Maybe she would have treated me well for the rest of our lives. But it still wouldn’t have been worth it. I could trust her to care for me, but I couldn’t trust her to be the sort of person I was proud to know.

There are a million iterations of this: the bad boy who treats his girlfriend like a princess, the parent with an obvious favorite child, the boss who abuses everyone except their star employee. Maybe that dynamic is stable enough that the golden person would never become the back sheep, though I doubt it. But even if so, the bigger questions remain. Is this a person I believe in? Is this a person who makes the world a better place? In short: Is this a person I am proud to know?

If not, why are you there?

Have you ever encountered this? Do you think someone can be horrible to everyone else and still be worth having in your life? Do you think they could really sustain their kindness? Tell us your stories!