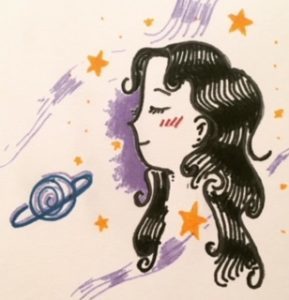 First thing Monday morning, Mars closes its trine to Pluto as Venus does the same with Jupiter. It’s quite a send-off under a pre-new, Virgo Moon. Dark but promising. There’s just enough potent juice left to launch us into collective action, eyes on the prize. Go for it!

The Virgo Moon spends the rest of the day moving into conjunction with the Sun for our new moon. Immediately the Moon perfects its trine to Uranus and then the Sun follows suit. Our fresh start encapsulates that Uranus trine exquisitely, truly new and truly fresh. Earth to earth, we can surely expect concrete results to the seeds we plant now, whether they’re ideas, plans, or vows of service or justice.

The new moon also includes Mercury’s waxing opposition to Chiron (exact Tuesday night). Tell the truth; it’s one of those instant karma moments for many. It’s the kind of influence that’s ripe for teaching us a lesson. Make sure it’s the lesson you want.

On Tuesday, the Moon continues in Virgo, trining Pluto and conjoining Mars. It’s a swat on the backside, just a little one, either for encouragement or for a laugh (depending on how you’re doing with things). Tuesday night the Moon heads into Libra as Mercury opposes Chiron; sometimes a good lesson satisfies.

Wednesday brings the Libra Moon into trine with Saturn, then into opposition with Chiron and conjunction to Mercury. If you didn’t get a chance to suss out the truth of the situation, now’s your next chance. This stellium in Libra just past the new Virgo Moon might test your values, or it may give you an opportunity to hone them and get back in balance with yourself. It pays off to do so.

Thursday’s Libra Moon squares Pluto and trines Jupiter then goes on to conjoin Venus at 29 degrees before heading into Scorpio. How would you like a taste of controlling controlly control with a side of obsession? It’s spicy, but it also compels us to get back in line with what we’re truly after. It’s a reminder not to fall back into old compulsions if we want to come out smelling like a rose with the prize in our hand. The mood desires wholeness.

Early Friday, Mercury in Libra quincunxes Uranus in Taurus, both in Venus-ruled signs. It can be a truly great idea, a flash of genius, or it can also be something along the lines of an unexpected and shocking message, perception, or condition. Pay attention either way!

The Scorpio Moon squares Saturn then Venus moves to Scorpio in the afternoon. It could feel like foreboding or impediment, or it could be the slowdown that accompanies a natural sense of prudent caution. Either way, Venus begins a wide square to Saturn as the Moon heads into opposition with Uranus, exact in the night. Let’s just bring up that old saw – fools rush in. But be prepared if someone rushes in at YOU. The mood is potent, and it’s expert. Being prepared doesn’t include worry, so don’t. You can make something of this.

After the new Moon, the Virgo Sun heads into opposition with Neptune and trine to Pluto. Our freshly lit path acquires flow, purpose, and depth of power. Take care of yourself as you care for others.

The new moon in Virgo takes place at 14 degrees and exactly trine Uranus. Likely we’ve got a surprise in store, something tangible. Where is this working its earth magic in your chart?