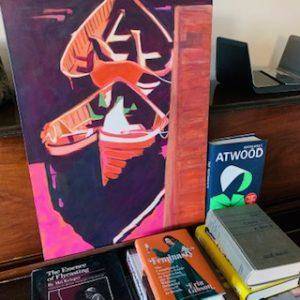 Early Monday morning, Mercury moves back into Pisces. It covers old ground this week: 0-3 – the degrees of mid-January, direct; as well as the beginning of March, retrograde. If you can directly connect those times to something personal in your life or something general in the collective, let us all know in the comments. We’re likely to have recurring themes emerge again, linked to those times.

Mercury back into Pisces is unlikely to unsnarl the foggy information network. We should, however, pay close attention to the drives of our intuition. Pay attention to your dreams as well. Whether you want to believe in a feed from the collective stream, subconscious fact monitoring, or divine revelation, they tend to present similarly as information that seems to come from within but without awareness of where it originated. That can be in words, pictures, sounds, tactile sensations, scents, tastes, and may be indescribable.

Neptune is the ruler of Pisces and is in Pisces. Venus in Taurus, one of the signs it rules, moves into orb of sextile to Neptune this week. Venus also chases a trine to Mars in Capricorn. So now we’ve got the senses, mind, and communication in imprecise but inspired Pisces; but we also have the benefit of divinely inspired action through desire.

In addition, Mercury makes a semi-sextile to 29 degree Saturn before hitting Pisces on Monday. There’s solid opportunity attached to its exit from Aquarius. We’ve laid in some lofty, discerning, erudite, and grounded plans for the collective, in the collective. They’re unprecedented, never seen before. Once in Pisces, Mercury moves into orb of sextile to Uranus, a continuing link as Uranus is the ruler of Aquarius. The flow of information may be intangible, but it finds and fills all the cracks. There is shocking information emerging but also opportunities to create miracles, spiritual or scientific (or both).

Again, Venus sextile Neptune in all of this is a divine gift. Participate in the gift by elevating your desire nature and making your compassion known in tangible ways.

Wednesday the Pisces Sun hits 29 degrees and a sextile to Saturn. The Sun at the last degree of the zodiac touches Saturn in its own sign in its final degree in opportunity. Thursday the Sun hits the first degree of Aries and the beginning of the zodiac: the Aries point and the first day of spring. Taken all together, this is a chance to DO THE RIGHT THING and have it reverberate through a new, yearly cycle.

We have a chance as a whole world to sing a new song together.

If you’re given a choice to do the right thing or not, do it. You should anyway, right? This week it’s a gift. To yourself, to the world.

All week, the stellium in Capricorn compacts its four planet conjunction in the last third of the sign. On Friday, Mars overtakes Jupiter, changing the order and heading into conjunction with Pluto. Action intensifies. It launches but is only in the first stage. It’s a rocket of concrete action, and there’s much more to come.

Capricorn is the sign of consequences and impressive works of perseverance. You can’t always tell the correctness of your actions till they’re taken as a whole. It is so very important that we all do the right thing now for exactly this reason.

This is a choice. We can see our connectedness now, but we’re going to have to look within as well as around us.

On Monday, Mercury moves to Pisces in sextile to a Sagittarius Moon – a mood of hope and fortune. It’s a GRAND story! The Moon then moves to Capricorn and the collective mood solidifies, gains a somber quality reflective of these heavy themes. The Moon moves through Capricorn through Wednesday, then moves to Aquarius Wednesday night after passing over the Cap stellium. It’s a grand and terrible story. It has power.

Fear is optional. You can also find it heartening. It can pump you up to make a difference.

The Moon in Aquarius lasts through Friday night and helps us connect to the mood of the world. We can access the fear and uncertainty, or we can float over and above and find satisfaction in working the opportunities available to leverage our actions into that gift.

How are you managing? What’s your thinking like at the moment? Are you finding a way to make concrete moves toward getting in the flow? What do you have faith in?