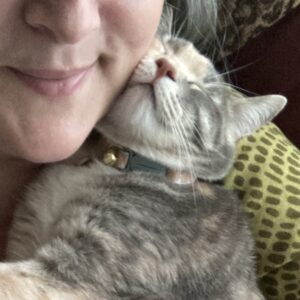 Monday afternoon, the Moon moves to Scorpio and into square with retrograde Saturn in the first degree of Aquarius, both fixed. If life feels challenging, that’s par for the course these days. If you feel resigned and dug in, consider yourself on top of the wave. Some people are finding they’re made for this. With Saturn in the mix, consider that experience matters here. You can go deep, persevere, and also be shored up.

Tuesday the Sun in Cancer squares Chiron in Aries, conjoins retrograde Mercury, then goes on to sextile Uranus in Taurus. Monday and Tuesday, that cardinal square energy and the cardinal Sun’s sextile to a fixed Uranus could be interpreted as forced change. However, it’s more precisely termed opportunity. When you absolutely need to start a new phase, being pushed is not the worst thing that can happen.

Tuesday’s Scorpio Moon quincunxes Venus and Chiron while opposing Uranus (a yod). It also trines the Sun. You don’t have to be a shiny, smiley character to access the goodies of change for your own (and others’) benefit. Fear based people think they’re giving their power away when they participate in the good of the collective. In reality, that’s not how that works. Going deep, understanding that your home and family are bigger than a bounded place and a few individuals… that’s living in your power.

The Moon also trines retrograde Mercury as Mercury sextiles Chiron. It’s learning but also understanding. It’s possible to sense the truth of the matter, through all the senses. It’s emotionally moving, and the emotion drives the point home.

As was pointed out in comments on the weekend forecast, Juno and Chiron move more closely into opposition across the Libra-Aries (relationship, self/other) axis. Retrograde Mercury moves back into square with the opposition, all cardinal. As a t-square, this peaks Thursday, but all week we have realizations that affect relationships – as well as emotional news that can sting, or possessiveness that wounds. It’s possible the news isn’t all it seems, but it can also be the emergence of the WHOLE truth that’s been withheld. Don’t jump to conclusions. It feels intense, but verify before you internalize (or externalize through action or communication). On its face, the effect is rough – but it’s also a route into an eventual path forward. The roundabout way.

Mercury is moving back through Cancer into square with Aries Mars. This is quick to anger, quick to act energy. Starting something. It’s also a sharp tongue. There are always times when quick action is necessary even when it’s not pleasant. However, consider whether or not you’re willing to gamble on regrets.

Wednesday morning, Mercury makes its exact square to Chiron. If you can’t say something nice, consider whether or not it’s a good idea to say something at all. But again, judgement is necessary and sometimes the truth hurts. Be wise, even when it’s hard. Not every communication can be executed without a sting – not if you’re being real and truthful. How you say it matters, even if that still hurts.

Wednesday, the Moon winds up its tour of Scorpio with a trine to Neptune and sextiles to Jupiter, Pluto, and Pallas Athene. Connection and stability can be found in the collective mood, but the roots still go deep. There’s more at stake than usual and that emotional connection is LOADED. Then retrograde Saturn moves back onto the 29 degree of Capricorn.

The Moon sextiles Saturn then heads into Sagittarius to trine Mars. We’re back to some of the restrictions we’ve previously encountered. It’s not as straightforward as it sounds. These are one part the internal experience of external restrictions, they also pick back up with our experience of internal limits. It’s a bit to ruminate on. It will take time to unfold. Keep plugging away at it.

Right now, Mars is direct and Venus is direct. They’re not yet in close orb of sextile, and Venus is moving slowly, post retrograde. We’ve got some recent, fresh developments to the area of values and desires – also love and money. Take the first steps toward the active implementation of such. Maybe not a plan, exactly, but try on some of these improvements and see how they fit. Pleasant novelties are possible now too. We’re finding a better fit with ourselves and with others.

With all of these in effect, consider this: Are you genuinely lonely? Are you bored? Perhaps you’re neither. Perhaps you’re intellectually interpreting gut impulses in that way when they’re actually NEW, NOVEL, uncategorized. Give it time. We can rush remedies that aren’t remotely suited to the actual issues. Pay more attention to the feelings and don’t rush to judgement on what they mean. Let more information emerge. Take a second look.

Thursday the Sadge Moon opposes Venus then trines Chiron. The Moon quincunxes Uranus and Mercury (another yod). It’s possible to find something you want and it also satisfies. It’s possible to get some of that back from others. It’s exciting, it piques our interest in new ways. Buy yourself or someone else something pretty (or make it, or it can be intangible), but don’t attach it to a commitment. This a true, loosey-goosey pleasure for pleasure’s sake. And humor, and fun, and adventure. If you’re alone, look for a gift from the universe – or give one to the universe.

Friday, the Moon moves through the last third of Sagittarius. It squares Neptune and moves onto the south node. With that forward thinking, foolish-wise mood, it’s easy to trip ourselves up by ignoring the bigger picture. Don’t do that. Don’t mindlessly pick up an old habit or shoot yourself in the foot. It won’t satisfy you anyway.

Tears are a valid way to process information.