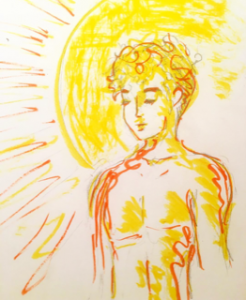 It’s nearly summer. These are the last few days of spring as the Sun moves into Cancer Thursday. The zero degree of each cardinal sign is a solstice point. It signals change. It creates a framework to measure growth and quarters the yearly cycle. Spring ends so summer may begin, once again.

When the Sun moves to Cancer, it sextiles Uranus and forms a t-square with Chiron and Saturn. We’ve had quite a few cardinal t-square solstices, but none like this one. It’s a new old-pain. But compared to years past, it’s more akin to growing pains than injury or shock. If anything, discomfort signals us to clean up after our old injuries so we can get to kicking some brand new butt.

If we find ourselves slowed down by some old issue, we should take that cue and address it. We’ll get a chance to check in again at the next solstice, in autumn. That’s harvest. Tend to what’s cropping up now while Uranus brings the opportunity to upgrade.

Monday, Mercury in Cancer forms a grand trine with Jupiter and Neptune, and the Virgo Moon forms a brief grand trine with Uranus and Saturn. The Moon and Mercury have mutual reception via each traveling through the sign the other rules. The Moon is in earth and Mercury is in water. They hold space for each other, if you will. The mind flows with imagination and far reaching philosophy. The heart is grounded and electrified, girded. Intellectual and sensual passion and compassion are aided by good boundaries and the need to care for others. There’s protection.

By nighttime Monday, the Moon moves into opposition to Neptune. Tuesday morning it forms a kite with the water grand trine. And Neptune turns retrograde. This looks like divine intervention, an earthly change of heart direction. There’s a chance to come together, but that chance can be slippery. Neptune is wiggly.

Here’s a caveat: Anything that’s meant for you, can’t be missed. But… you can be contrary and make it harder. So don’t. Be willing to see the magic. There’s every opportunity to do so if you’re not contrary.

Early Tuesday, Leo Venus quincunxes Saturn in Capricorn. It does so within minutes of conjoining the north node. Where we choose to place our value now has long reaching repercussions. Stretch for a greater good, even if it’s harder. Venus will make its exact opposition to Mars on Thursday, but it applies now. Don’t do the same old thing you’ve always done. Reach for the ethically sourced gold that pays out later.

Later Tuesday, the Moon moves on to trine Pluto. Feeling dips down into a lower, more powerful gear; it grips. Emotion is powerful. With the Moon in Virgo, that power is best served by serving others.

Wednesday the Moon moves to Libra, into square with the Sun. It lights up the cardinal squares. The mood illuminates the rough spots, as we can feel them. It also sextiles Venus and trines Mars. Not sure what kind of force to use to get what you want? Go with your gut Wednesday night.

Thursday is the Cancer Sun on the solstice point. The Libra Moon squares Mercury and Pluto, their opposition closely applying. Don’t get in the middle of an argument if you can help it. If you are part of the argument, you may not be able to help it. It can be explosive. That doesn’t mean it won’t be necessary. People tend to take “devil’s advocate” positions with energies like this, and it can be infuriating, and hurtful. They can also take their toys and go home, plucking at your need for engagement. Or you could be the one. Being polite and not taking the bait is an excellent strategy before you wade in and say something devastating.

Friday, the Moon moves from Libra to Scorpio. It trines the Sun and opposes Uranus. It moves toward a t-square with Venus and Mars. Move to nurture, not shock. Prioritize the greater good, but often the way to attain that is with a self-care first strategy. Don’t build anything new on a worn-out foundation. Hold out for a change-of-heart driven improvement. We can do better, by far.