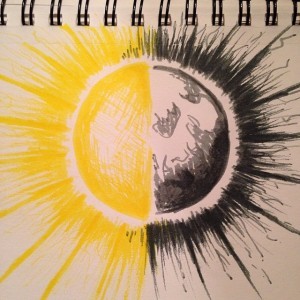 The Aquarius Sun is making some major moves this week as it squares Uranus on Tuesday and conjoins Jupiter on Thursday (just after the full moon). It moves in square to Mars all week as well. Day to day life is impacted greatly, obviously, but our ability to project our daily selves into the future is complicated by all this tumult and loud banging.

Still, we benefit from the attempt. There are things that must be managed, rain or shine. According to Alice Walker: Hard times require furious dancing.

With Saturn, the Sun, Jupiter, Pallas, and Mercury in Aquarius there’s a pronounced emphasis on unprecedented but exciting options, for now and for the future. Mercury is much further ahead in the sign than the rest and will start its retrograde on Sunday. That actually looks promising as it will travel back over all those planets and give us a chance to bat clean up on anything we missed… planning wise, communications wise… a chance to readdress our attitudes and to upgrade.

On Thursday before the full moon, Venus in Capricorn conjoins and moves beyond Pluto. That puts the entire run-up to the full moon and the lunation itself under that Venus-Pluto spell. Love issues you thought were solidly in the past may resurface. So may financial subjects. In Capricorn, here’s your reminder to address these issues with maturity and righteous action, whatever that means to you. Considering the timing, it’s likely to accompany an ending. However while many good things can end, bad things can end too. It’s a transit that heralds the power of love, money, possessions to transform and be transformed.

On Monday, the Moon finishes up in Gemini, just coming off a trine to Mercury. Things should be pleasantly interesting with all kinds of change in the wind. When the Moon moves to Cancer it transits its home turf, so that is promising as well. Once in Cancer it squares Chiron and sextiles Uranus. Be true to yourself and the mood should bring some electric fun (and perhaps pleasure).

Tuesday, the Cancer Moon sextiles Mars early and goes on to trine Neptune. While all the other “stuff” brews, the mood favors action and carries an anesthetizing influence that powers great expression.

Wednesday, the Moon tours the end of Cancer and opposes Venus and Pluto. If you’ve not found where Venus-Pluto is expressing for you personally, likely you’ll find yourself spinning on the other end of someone else’s experience.

Thursday morning, the Moon in Leo opposes Saturn as Venus-Pluto perfects. You don’t have to be sidelined by drama. You can also laugh it off, be generous. It needn’t be painful. It will be for some who are directly affected, but if you can – remember everything plays out over time and time does heal.

The Leo Moon opposes the Aquarius Sun for the full moon. The Sun closely conjoins Jupiter and the full moon squares Uranus and Mars and trines Chiron. The effect is possibly physically violent*, but many will be in the position to absorb that violence and create with it. With Chiron’s easing influence, remember to be true to your nature, true to who you are for best results. At the full moon, the Sun is between Saturn and Jupiter. Even in air, this is stabilizing and harmonizing. Just the right amount of purpose.

It’s a good time to release any false pride or hindering mask that has been keeping you from expressing what’s genuine within you. Ego is necessary, but toxic ego issues can be left behind. Extinguish the fire of what doesn’t work. Power up what makes sense and benefits you in the concrete, real world. What worked when we were younger doesn’t always age well. Let that shit go.

On Friday, the Moon continues in Leo to oppose Mercury in Aquarius. Take stock. People will be full of information they wish to share. Friendships and groups will be abuzz in analysis and connection. The Moon quincunxes Pluto and Venus. Push yourself to make something powerful of all that information, powerful and beneficial. But also, you don’t have to make it all happen at once. Take some time to play if you get the chance.

The full moon takes place at 9 degrees Leo. While most will feel this somewhere, those with strong fixed placements (Taurus, Leo, Scorpio, Aquarius) are the obvious choice for intensity around this lunation. Where does the full moon hit your chart? Where does the Venus-Pluto conjunction (25 Capricorn) affect you?

*Things can be violent that are neither unpleasant nor damaging.