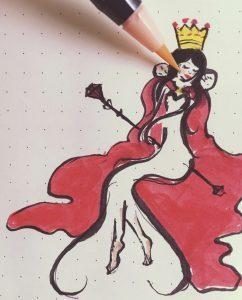 We’re in between the two Aquarius full moons and just past the new Leo Moon. Whew! We’re getting there. Do you feel it? Do you feel like you’re on a roll yet?

With Venus and Mars in Virgo, it’s easier now to set your sights on a target and actually have the energy to get there. That doesn’t make it easy for sure. We’re doing things for practical reasons, and there’s a chance to advance in real time. There’s even a chance to create some value or extract some value, or both.

Monday the Leo Moon opposes Jupiter then heads into Virgo to conjoin Mars. Our new moon energy takes the personal out into the world then puts it to use.

Venus completes its opposition to Neptune. While we likely gained perspective under this transit, it also created angst. We can keep the perspective and drop the angst. Venus then heads into trine with Pluto (exact Wednesday) for a boost in personal magnetism. The collective yen for accomplishment, or at least practical advancement, knows just what charm to turn on and when. It’s a powerful attractant. It’s also pleasurable to feel that magnetic attraction.

Tuesday the Moon in Virgo trines Uranus and opposes Neptune. The collective mood is practical and observant, and there’s a lot to observe and desire. You may feel a ping the heart from something you’re in the process of letting go.

Tuesday afternoon brings Mercury into opposition with Jupiter. It sounds like good news to me, or at least loud, proud, and out-there news. It also helps to make sense of this news, these sensual bombardments. Consider what the outside world is saying and what it means to you.

Wednesday, the Moon continues to the end of Virgo with a conjunction to Venus and trine to Pluto. It’s sweet. It’s hot. And it satisfies. Later the Moon moves to Venus-ruled Libra and Mercury moves to Virgo, one of the two signs it rules. Immediately after, Venus trines Pluto exactly.

Those are some smooth moves! It’s a seduction, and Mars in earthy Virgo sits between Mercury and Venus. Speak your heart, but with a Libra Moon – we want reciprocation for it to fully satisfy. As it should be. We deserve that. There’s no need to settle.

Thursday morning, the Libra Moon trines Saturn, air to air. This is a good one. Slow down and look for the fast lane. You can zip around when you need to, but otherwise try to look like you’re in control from a perch of leasure. Later the Moon opposes Chiron then goes on to sextile the Leo Sun in the night. Don’t take less than you’re worth.

Friday, the Moon continues in Libra with a square to Pluto and a trine to Jupiter. Control only goes so far, and sometimes you’ve just got to jet out. The evening brings a Moon move to Scorpio and a sextile to early Virgo Mercury (exact overnight). Stay in the game, keep it tight. The right words make all the difference. Be subtle and direct… it’s possible to be both.

How are you feeling after the new moon in Leo? Where did it hit your chart and your life?