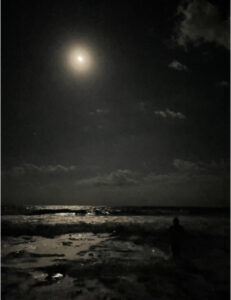 Friday night, the Pisces Moon conjoins Vesta. A bit of a breather if you relax into your intense interests (underwater breather? Mask and snorkel/oxygen, bubbling in the deep). Go in, find flow. Find your channel and let softness lap at your heart.

Saturday night, the Pisces Moon moves from opposition to Mercury through sextile to Uranus. Combine that with the active Sun-Saturn and the mood ferries understanding through to innovation in a way that cements your plans. Maybe some news comes through that gives you an electric epiphany.

Also active through Sunday, Mars in Taurus trines Pluto in Capricorn (exact Sunday afternoon) and Venus in Leo trines Jupiter (ongoing). We design, we act… so creative! So powerful and potent.

It is INTENSE desire, clever and gorgeous and rocket-fueled. ON FIRE. It is delicious delight in movement. It’s THRUSTING. Potent. Life changing. MAKING something. A bit dark, but in a dark comedy sense. Like I said, clever. We like to be pushed sometimes, yes?

On Sunday, the morning Pisces Moon conjoins Neptune. It goes on to sextile Mars and Pluto, spanning their midpoint. Morning and afternoon DELIGHT. Deliriously pleasureful and satisfying. It’s also a great time to brainstorm and implement as Mercury heads into trine with Uranus. Practical, but profitable! Profit doesn’t have to mean money.

Then the Moon hits Aries and a trine to Venus, heading into conjunction with Jupiter overnight. It’s definitely a GO GET ‘EM kind of night. Expect plenty of emotional energy, and it also hits physically. Rawr ::Godzilla-fingers::.

How was your full moon? Do you have any weekend plans?