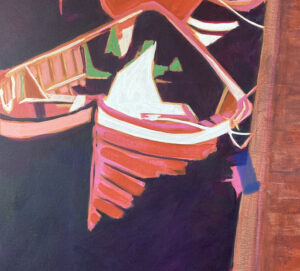 Things have been and will continue to be dicey, but sometimes there’s still room for something nice to pop through. The Sun in warm and affable Leo pairs well with a strong, healthy Aries Mars. Sure there’s some spear shaking and RAWR, but the weekend’s Libra Moon brings a pleasant breeze to fiery action-packed stories.

Friday night the Moon finishes up in earthy Virgo with a trine to Saturn. It’s settling, it’s back in the groove. It’s an anchor and restriction, but it also promotes order.

When the Moon moves to Libra, it sextiles the Sun. There’s lift and the mood lightens. In Virgo, the Moon tied the mood to Mercury in Cancer trining Neptune, the ability to numb out in all the right ways. Once in Libra, the mood taps Venus in Gemini in square to Neptune, the sense that something is not quite right, but what?

Both these influences affect the whole weekend. Mercury also squares Mars and the action gets quick and hot with very little fuse. Watch your words and your actions as it’s very much an instant karma sort of thing.

There are some abrasive and emotional words and actions, all tied up with the desire to cling to illusion and delusion. We pick up speed as we go because it’s exhilarating (or we’re bored).

Mercury trine Neptune is a bit of an invisible hero here as both move into aspect with Jupiter. Divine wisdom filters in with the last minute save. Listen to that voice in your head. Or the voice on the megaphone. Your gut will filter it just fine.

Saturday night, the Libra Moon forms a t-square with Mars and Mercury, but it also trines Venus overnight. It’s a challenge to keep things pretty and nice, but the sweet, airy Venus game is strong now. Use your words and your actions, but be sure to gild the lily with some niceties. It’s worth giving your word choices a bit of a second thought. That can make all the difference. It really is true that you catch more of whatever you’re after with honey.

Sunday morning the Moon closes its trine to Venus and moves to square Jupiter. A lot of this weekend is about taking a deep breath and finding the high side before you proceed. Sunday morning you might just have a bit of a scream to let the pressure out. The Moon goes on to square Pluto and Saturn as well. That’s some stark intensity for a mood that would really like to relax and beautify its surroundings.

The more you play with that pressure release valve and respond with measured elegance, the better things will go. Moon-ruled Cancer Mercury in trine to Neptune brings a sensual aura to season that tang. Look for the high road and the honorable plan. If you have to burst someone’s bubble, now may be the time to do it. There’s no better time to come out smelling like a rose. Just keep smiling and trust that the right words will come.