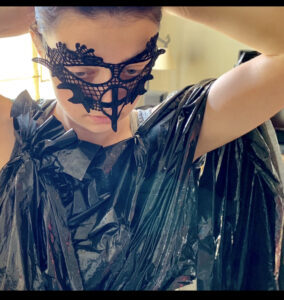 Friday night the Moon finishes up in Sagittarius with a conjunction to the south node. The Jupiter-ruled Moon is influenced by retrograde Jupiter in Capricorn traveling closely conjunct Pluto. It’s a less than patient mood that bucks conventional currents and restraints but nevertheless engages.

Jupiter, Pluto, and Saturn are all retrograde in Saturn-ruled Capricorn. They move back along their own timeline, each at their own rate but moving together. A cauldron of meaning, power, responsibility. This cauldron concentrates their attributes. Pallas Athena, a stand in for intelligence and pattern recognition, moves direct over the group, stirring the pot.

They don’t blend, but they highlight and boost core attributes of each. As the Moon moves over the south node, something tired, something past its prime but still kicking is felt keenly. Only you can decide if you’re ready to let go.

On Saturday, Libra Juno makes its exact opposition to Aries Chiron. Over weeks we’ve encountered reasons to alternately praise and doubt one on one relationships, the relationships we have, and the loyalty of the individuals we’re eying (or perhaps its we who are fickle or wounded). As the exact opposition clicks, it pulls in newly direct Venus in Gemini: trine to Juno, sextile to Chiron. The tools for the fix are available, accumulated over time under the guise of a different use.
Have you ever acquired something and realized it wouldn’t work for what you wanted… only to find the perfect use later on down the road? That. That cauldron of Capricorn works some mundane magic all around this weekend. Alchemy, but no one will believe because it’s so down to earth.

Saturday night, the Capricorn Moon squares Mars in Aries, opposes retrograde Cancer Mercury, and squares Chiron in Aries and Juno in Libra: a loose grand square, a tense and emotional standoff with pokey-hurty challenges and passion. The Moon also trines Uranus in Taurus, earth to earth. The stage is set for a good spat at least, maybe even a fight. But it’s a tired fight that exists only to expiate pent up differences. That doesn’t mean it doesn’t sting.

Why not innovate and get something valuable out of it? Fighting the same fight is boring. Fighting is boring. This sort of fight is for people who have hurt so long over the same thing that they would rather hurt than feel nothing. The alternative is to pull something else out of the cauldron and shine it up. We know what we can’t have. What CAN we get? Can we want that instead? Work with THAT.

With retrograde Mercury in Cancer and so many retrograde energies, it’s possible the fight has already happened and this is just the AHA part. Or it could be an external situation you’ve internalized and the fight is internal.

And then the Moon moves forward into opposition with the Cancer Sun, the full moon eclipse. The Sun exactly conjoins Vesta, devotion. The Moon is burdened in Capricorn and ripe to give something up with its proximity to the south node. Cap ruler Saturn is in the cauldron. Why not give up a burden? An emotinal burden that keeps you from making some mundane magic and innovating your values, from running free? The Moon holds that trine to Venus and moves into sextile with Neptune.

It’s time to let some emotional baggage fall away or turn into something else, something useful. It’s keeping us from focusing on a new, foundational emotional devotion that takes us forward in our lives.

There’s no need to condemn the thing, just let it drop. Into the soup. Let it become something else, something of the new bedrock of your path.

Venus is moving along in loose sextile to Mars as Mercury moves into square with Mars. Things are bound to go BOOM, but the boom might propel us into something better, quickly. We’re bound to step in it, physically, emotionally, verbally… even with our body language. If you can accept that you’re bound to eff up but that it can still be fine, perhaps you can relax… and it’s enough. Throw it all in a bag and shake it. Hope for the best and keep moving.

Aries Mars does simple moves well. Don’t bother with a bunch of exhausting planning. Cancer Mercury in retrograde motion is likely to miss the mark emotionally, but you’ll get another chance to clean it up. Eventually. Don’t worry too much about minor damage. Don’t hold any fireworks in your hands though (you don’t want to lose a finger!). Loud noises and bold moves are definitely on the menu.

We’re going to find the right formula for success. We’re going to line up with our passion and our highest calling. So don’t sweat the dirty stuff that happens in between. Cap Moon is a calm heart when it finds its footing. Anxiety can draw us toward collective perseverance and measured satisfaction… in the end.

Sunday morning, the Moon makes its exact sextile to Neptune. Look for your own silver lining in the houses where you have Capricorn and Pisces. It might feel like a war-torn silver, but it will buff out. The Cap Moon then travels through the cauldron: Pallas, Jupiter, Pluto, Saturn. See them as allies that polish your shine. It’s an intense mood, but it also helps solidify monumental change.

This weekend is thick with self/other, home/career standoffs as well as issues with parents and authority figures (that go straight to the heart). What can we expect in support and in nurture? Who is for us and who are we for? We investigate the very nature of standoffs themselves. Can we align with anyone? Maybe we have to give something of ourselves first in order to do that. It’s a great time to give up a bad habit that’s seen its day. You’ll be surprised at how little you miss it.

The full moon takes place at 13 degrees Capricorn. Where does this impact your chart? Those with chart emphasis at 8-20 degrees cardinal in particular are likely to feel a deep impact.