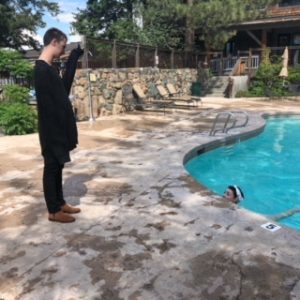 Friday night, the Aquarius Moon comes off a square to Venus in Taurus. Heading into quincunx with Cancer Juno and sextile to Jupiter, the Moon sheds frustration and reaches into the lure of future attractions. It brings bounce, but it also means a bit of tuning out in order to turn to what sparks the joy.

With the Sun and Mercury in early Gemini and Mars in Cancer, there’s a variety of possibilities popping and plenty to explore when you follow the experimental mood.

That cast continues Saturday through the end of the sign. By the end of the night, the Moon lands in Pisces. In Pisces it conjoins Lilith. It’s clear sailing in airy style… until it isn’t. Know when to call it a night. If you’re truly adventurous, you get a pass to go on and on, ecstatically.

Sunday morning, the Pisces Moon moves through Lilith into sextile with Uranus. It’s possible to improve the emotional fog by steering through with your sights on something new, something pleasurable. You do this not by ignoring where you are, but by actively embracing it and moving through to a third point (action of Chiron on their midpoint).

The Pisces Moon goes on to square the Sun and trine Mars. We’re midway through the second half of the lunar cycle – from full moon to new moon. Take it in and keep moving, physically and emotionally. Connect. Connect with others, yourself; connect the dots. You don’t have to actually be with people to connect to the feel of people. Do it however you feel you need to. By nighttime, the Moon moves into square with Mercury. Expect some jarring realizations. With Mercury in Gemini, there may be multiples.

On Sunday, the Sun perfects its sextile to Chiron in Aries. Let the wheels in your head turn as they direct you toward attitude and heart bending action. Learn something. Get into step with the healing that’s available now.

All weekend, Venus in Taurus (its own sign) moves into trine with Saturn in Capricorn (also in the sign it rules). We’re building solid value. It won’t be exact for another week, but this is an aspect that comes on slowly. Is there something you’ve been working toward, wanted forever? What’s meant to be will begin to unfold as you see some of that start to fall into place. Keep going, don’t stop now!

On the other hand, it may be that the last bit of trail is steeper, but the pleasure rises as you continue.

Venus will move into sextile with Neptune as retrograde Saturn does the same. We’ve got invisible help here in morphing a very solid dream into reality. If someone offers you a gift, take it. Or perhaps agree to take it, and the gift comes later.

Juno in Cancer moves into conjunction with the north node as Saturn moves back toward the south node. Juno moves into opposition with Saturn and trine to Neptune. When we’re going for what we want, we may have some competition… or seemingly so. Each of us will get a chance to nail down what’s meant for us alone. For now, we don’t need to know all the details. Just head in the direction that feels right. It’s like the game of hotter-colder. It doesn’t matter if you’re right or why you go – just heed the feeling to go. All can become clear later when you lock it down.

Choose intuitively and deliberately by feel. Obstacles are helpful – they are directives. If you’re not moved, you don’t have to be. Sometimes the right thing is nothing. Know your best moves by feel. You’ll be guided, directly or indirectly. So. Why not have fun in the meantime while your solid goodies set up?