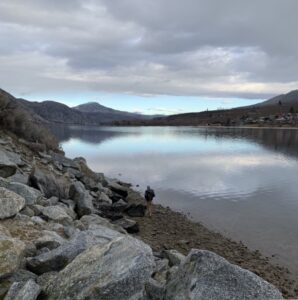 Friday night, the Pisces Moon sidles up to Venus as Venus approaches Neptune. The mood is dreamy, luscious, soaked with ideals, desire, and exquisite longing. With the Moon and Venus moving into Neptune together, that longing can be satisfied. It’s peak relief, even if that doesn’t last.

Magic is something you experience in moments, but when we’re lucky we’re left with the dream-steeped remainder. The corsage from a dance. A bit of ribbon once held to someone’s cheek. The memories infuse us with eternal, untouchable beauty that can never be taken. A most personal joy that rises again and again, spreading its delicate scent of sweet perfection… here and there, then and again.

That takes place in the dark of the Moon as the Moon approaches the Sun for their early Saturday new moon conjunction. The new moon traps a seed in honied amber. It grows in a different way to a regular seed you’d push into the earth. It isn’t tangible in the usual way. It seeds a fairy sprout, and its range is everywhere.

That doesn’t mean the new moon won’t bring genuine bounty, things and actions in the real world that manifest in our mundane life. Mars in Gemini moves in trine to Aquarius Saturn, spurring clever action with serious repercussions, an easy swing of the hammer. Mercury in Aquarius presents cutting edge plans.

Saturday night, Venus washes over a conjunction with Neptune; a phantom bud of the new moon springs into being.

Saturday night brings the Pisces Moon to a close, but the Moon is growing in light as it slips into active Aries. The Aries Moon heads into sextile with Mars for a bright and fun-filled mood to move. The later it gets, the more you want to go go go (even if it’s only in dreams).

Overnight, the Moon gets within orb of sextile to Saturn as well. By Sunday morning, it hits the midpoint of the building Mars-Saturn trine and then sextiles both as it conjoins Chiron. A fiery mood to move has a background in Venus-Neptune magic… it feels grand, but does sting a bit when you can’t nail down that sweetness entirely. Learn from that. Perfect is unattainable, but adequate can be somewhere to begin.

The pieces of something meaningful are falling into place… falling or being placed. Be frank with yourself over the ability of your possible plans for a future build to satisfy your genuine needs. All weekend, the Pisces Sun heads into sexile with Pluto. The build is going to last, so simplify by jettisoning outworn bits that no longer suit who you’re becoming NOW.

What are your weekend plans? The Venus-Neptune conjunction takes place near the degree of the new moon, just less than a day later. Do you feel the longing?