I went on a date with a rocket scientist. He was ultra-cool and dapper, I was a lowly single mother living in the suburbs.

“I have a Lamborghini,” he said.

“I am a Lamborghini,” I said with a grin.

He didn’t get it.

Boy was he shocked when I turned down his request for a second date. 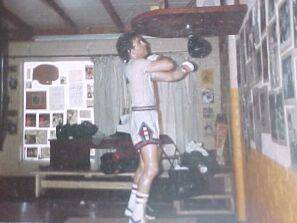 And this is boxer, Boom Boom Mancini.

He was in my town training for a fight so I went to meet him. I just showed up at the little dive gym on a dare.

Having never been in a gym in my life and I was scared when I walked in but I met Boom Boom and he said it would be fine if I want to hang out so I did. I went back for the next three days to watch and absorb and then he left town for Las Vegas to defend his title.

Two days later, I watched him kill Duk Koo Kim in the ring on a big screen TV in someone’s living room, no less which was an oddity at the time. You had to be ultra-rich to have a large TV at the time and the host of the party was courtesy the fact his father had discovered the most productive uranium mine in the world at the time.

In whatever case, I saw Kim die. I literally saw his soul leave his body and I said so, per my big mouth.

“He’s dead,” I announced as soon as Kim went down.

“No, he’s not dead, Elsa. Jesus. Don’t be so morose,” said my Capricorn boyfriend who I loved, but who constantly tried to control me.

But he was dead. Well he was brain dead and 5 days later they let his body go.

I haven’t watched a fight since. I never liked boxing anyway. For me, it was all about the dare. No one thought I could get myself invited to see a boxing champion train and I wanted to prove I could.

Are you a thrill seeker? Like a good challenge? Where is your Mars?