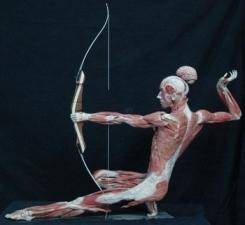 When the AMF asked if I wanted to go see the corpses, I mean Body Worlds, I didn’t hesitate. He wanted to see the exhibit in regards to painting the human figure. I wanted to go, because I’d never been, so we did.

I enjoyed it. I didn’t have any expectation, because though I’d heard of these dead, preserved bodies fifteen years ago, I hadn’t heard anything since. And I had no advance notice the bodies were in town, never mind we were going to see them, so I had no preconceived anything.

The exhibit made an enormous impression on me. I thought the bodies were utterly beautiful and very inspiring. And this was completely unexpected. The AMF thought what he thought, and saw what he saw, but I’m pretty sure I came at it from a completely different perspective. From that of a gym rat, specifically. 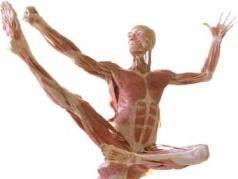 Because the bodies were posed in an athletic way for the most part. And they looked so damned toned. And I don’t know if the dead people I was standing six inches from were athletes when they were alive, or just posed that way. Because there is NO fat. There is no fat anywhere. The skin is off, the muscles are exposed and the bodies are uniformly beautiful. And I wondered if all muscles, if everyone’s muscles look like this? Sleek and toned, under how ever much fat they’ve got. Do they? Or are these super specimens of human beings?

In whatever case, I felt very inspired. The body and the lines the muscles create are just so damned gorgeous. And hey! I have a body and I have muscles. And after seeing this exhibit, I have a new appreciation for them. It makes me want to flaunt them. It makes me want to not hide beneath gobs of fat so people can’t see how finely I am sculpted…as are you and you and you. And with Saturn transiting in aspect to my Venus, it’s no surprise I would think less is more!

So anyway, I came home and you know I had to dig up this guy’s chart. The man who invented the technique (plastination) that stops the decay, I mean. Gunther Von Hagens. Because the people are skinned. There is no other way to say it, or to see it or to miss the impact of this. Because you don’t see people walking around without their skin…ever. So there you go.

I was particularly interested to see how his Saturn was aspected in his chart because of the skin factor. Skin is associated with Saturn because it’s a boundary. It’s what separates us from everything else. And sure enough Von Hagens is a Saturn-ruled Capricorn. Further he has Mars in Capricorn and here he is cutting (Mars) away the skin (Capricorn). Talk about lean! Holy cow! And from there, the plot thickens beyond the scope of this blog. Both the astrology and this guy’s history. But I wanted to post about this because it made such a strong impression on me.

For the record, the exhibit was packed. We had to wait to get in, and it was midway through a four month stay here. This also surprised me.

So what about you? Have you seen the exhibit? Would you be interested to see it, or no?