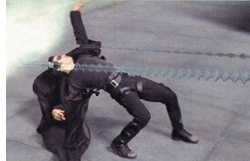 A few days ago I mentioned that which was my mortal fear of 6 years ago which became realized. I’ve changed dramatically since. I’ve matured more than anything else and I look at horror in a new way.

I longer think to think every bullet is going to whiz by me just because that’s the way I want it. I know one of those bullets may have my name on it and if so, that’s it. If you can lose your kid, you can lose your arm or your leg or your house or your life, see? This is an inarguable fact to person like me. What are you going to say? That can’t happen to you twice, Elsa? I’d have to laugh.

I don’t mind the changes. I don’t really know they are there for the most part, it’s like putting on weight slowly. You may know your body is changing on some level but it’s easy enough to deny until something brings it to the front which is what happened to me the other night.

I was talking to my husband and found myself describing my new horror which I realized later was untraditional to say the least.  “Are you thinking this…” he asked.

“No. I am thinking this may be her peak. This may be the capacity of her intellect and all she can do.  That is my horror, to realize this is the limit of her intellect, to find out that it stretches no further…”

How about that? I am afraid of stupidity. Not war, not starving, not plague… it’s as if I take all those for granted because I do.

What is hard to tolerate now, what terrifies me now is hitting the boundary of a mind be it yours or mine and here’s the very neat astrology…

I have wrapped up Saturn transit of my 8th house and how have Saturn transiting the 9th. You can see the very direct correlation, it’s a trip. I can also tie this to the transit 28 years ago.

I am fortunate now to have a gallows humor counterpart in the form of my husband, who also has an intellect I am not going to be able to exhaust so I expect to suffer much less this time around than last. Boy I wish I’d have married him them.

Name a fear you have resolved.