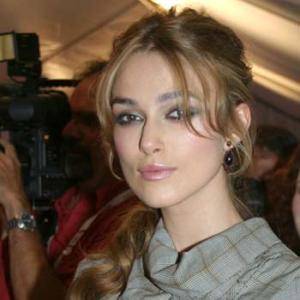 he very Aries Keira Knightley is said to have decided to act at the young age of three and had an agent at six and it is easy to believe when one considers her chart. Keira has a stellium of planets, including Sun, Mercury and Venus, in Aries. This would make her single minded enough to have chosen her profession very young and it helps that she is the daughter of a playwright and an actor. She grew up in the “business,” and made the business her life very young.

Backing up her very strong identity are her Moon, Mars and North Node in Taurus. With Taurus and Aries being such strong components of a chart, one would know who one is very young and single mindedly pursue the chosen path, even stubbornly! Neptune is at the Midheaven in the very career minded Capricorn. Keira has said in interviews that she has been working so much she fears it is too much and has declared she would take a year off. She also has said she will not be part of the next “Pirates of the Caribbean.” Keira has produced a very large body of work in only a few amount of years when one looks at her accomplishments. Often our art comes from our Venus (Aries) and with Capricorn on the Midheaven she would be a very hard worker. Practical Taurus buckles down and drives her engine and she continues to work constantly.

The style of an Aries is often one of not being shy about sexuality and Keira has appeared in very little in many photographs. She is not shy about her sexuality but shows a Taurus/Capricorn restraint when it comes to full on nudity for the purpose of just showing skin. She has been practical when it comes to showing her body and shows it with regard to her character, however, she is not adverse to taking some promo shots of herself dressed in very little. This has led to her being voted the sexiest woman on many lists, coming in first on one but being part of the list in several other polls. Pluto is in it’s home in her chart in Scorpio so she would not be shy about appearing sexy in whatever she decides she is interested in.

Aries, Taurus and Cappy are headstrong signs and many of Keira’s roles are just that: Headstrong women. Even in the movie “Pride and Prejudice,” she plays the strong role of “Elizabeth Bennett.” Her character in “Pirates of the Caribbean,” is also strong and can hold her own in battle making it a perfect role for an English actress who can dress and act in period clothing and character. She has recently signed to play yet another strong role; that of Eliza Doolittle. With all that Aries and Taurus we can expect her to take on strong characters and be comfortable in the attractive or sexy clothing required to play some roles.

Keira’s personal style has been one that has, at times, won her great praise. A Taurus is a lover of comfortable clothes that also have luxury in mind and she once wore a gown by Valentino that landed her on a “best dressed list.” She appears at home in luxury labels and is the face of Chanel’s perfume “Coco Mademoiselle.” She is also the face for a hair care label in Japan called “Lux.” Many times a performer in America or England will appear in commercials in Asian countries and Keira enjoys the income this brings her when she appears in commercials in Japan and the States as well as England. Many times a performer will appear in commercials in Japan but not in America and we see that Keira has that deal when it comes to “Lux.” The income is great for these spots and a Taurus loves sensual which ties Keira to work of this sort.

There are two looks that one can see Keira sport and they are very different. There is the very Marsy/Pluto look that has Keira appear in bare dresses that reveal both with plunging necklines and bare backs. She often sparkles in these dresses and if one is comfortable in one’s skin one is actually more comfortable in less clothing. We often see Keira show the skin. However, there is the very Taurus/Cappy look of Keira in little English suits and dresses that also becomes her and she appears in this look as well when she is doing charity work and the like. Her suits are often of pastel color and even have “peter pan,” collars. Her practicality is at play here but the suits are of the best quality, staying true to her Taurus Moon and Mars.

An Aries is not afraid of short hair and Keira has short hair and wears extensions often in roles that she plays. It is easier for her to roll out and go like an Aries will in short hair and also it is popular in England to cut one’s hair in trendy short cuts more than it is in America. Keira is no exception to this short hair trend and keeps her hair at a manageable length.

All in all we have a working chart here of a woman who is fairly sure of herself and her path. She will, in my opinion, continue to go at her pace for some time since she is young and has many more staring roles she can slip into before the Hollywood machine takes over and puts actors in their place if they are female. Keira is young and ready to go and that is exactly what she is likely to do.