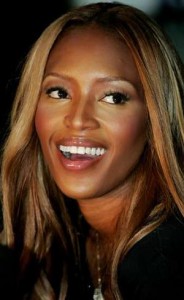 Naomi Campbell is one of the most successful models of our time and is as deeply invested in charity work as she is in brushes with the law. Naomi is a Gemini Sun with a Sagittarius Moon and Capricorn rising. She also has Venus and Mars in Gemini and Sagittarius is on the Midheaven. Naomi’s Uranus and Jupiter are in Libra supporting her Gemini planets and her Saturn and Mercury are in Taurus. Naomi’s Gemini planets are in the 4th house and the Moon and Midheaven in Sagittarius oppose in the 10th. This opposition has lead to very public outbursts and private battles as well. Her Sagittarius and Gemini opposition has also lead her to involve herself in charity work to make the life better for victims of disasters such as Katrina and in Haiti.

Naomi lives large both in her personal life and in her private life. She appears “larger than life” when on a runway and in print ads as well. With the opposition to the 4th house from the 10th, we can see that, indeed, Naomi’s father left when she was 2 months old and as she promised her mother, Naomi never looked for her father and has never met him. She has never named her father and neither has her mother. Naomi’s mother was a ballet dancer of Afro-Jamaican descent and it is said that her father was of Chinese Jamaican descent. Naomi claims that she sees Quincy Jones and Chris Blackwell as father figures and Nelson Mandela as a grandfather figure.

With Mars and Venus in Gemini opposing the Moon and Midheaven involving the 10th and 4th houses, Naomi has had issues with her temper that have led to brushes with the law and some convictions. She has three times assaulted an assistant with a telephone and this is interesting as the phone would be an important tool for a Gemini or a Sagittarius! She has also pleaded guilty to assaulting a housekeeper of hers and has been banned from flying British Airways for a rumble with police officers there. Travel being important for a model and for a Sagittarius, it is interesting where Naomi seems to have a bit of trouble. However, Naomi is one of the top earners for charities that she becomes involved in and seems to respond when there are people who lack basic needs in a disaster such as Katrina. With her Sun in the 4th, this would be a sensitive subject for Naomi and she raised over a million dollars for victims of Hurricane Katrina and has raised funds for those in Haiti in 2010. Naomi is very close to Nelson Mandela and has been active in relief for those in Africa. Her Sagittarius, giving nature seems to be very strong and she is able to understand the plight of others as well as finding a genuine interest in them.

When we see Naomi do what she does in modeling it is interesting to see her work her Libra Jupiter and Uranus as well as her Pluto in Virgo by what she wears. Naomi has appeared in ladylike suits very often and girly apron dresses. She often is dressed in puffed sleeves and other feminine clothing on the runway and seems to end up dressed in this sort of fashion. Naomi has a different look on the runway than she plays out in her life. When a model such as Naomi is dressed for the runway she has a bit of a say about what she wears as she is close to designers and she is also seen a certain way and dressed accordingly. It is interesting how she is seen when we see what she appears in while walking. More often than not, Naomi is wearing a Chanel-style suit or a “cute” dress than she is the “rough and tumble” style.

Her Libra placements can be seen in her bangs and her hair as well for she keeps it long in a mane (Sagittarius) but wears bangs and often has it in pretty (Libra) styles. With Gemini and Libra in her chart, Naomi can rock a little suit with high heeled Mary Janes on her feet. In her personal life we most often see Naomi in her Gemini/Sagittarius uniform of a pair of jeans and a message T. A Gemini is fond of message T’s and a Sag loves the ease of movement of a pair of pants. Of course Naomi has her share of almost nude or nude photos out there but one cannot be such a successful model without doing such shots from time to time.

With a strong 10th house, Naomi has been in music videos and movies. She is one of the most successful black models and was the first black model to appear on the cover of Vogue Paris. Yves Saint Laurent, the designer, threatened to pull all of his advertising from Vogue Paris if they didn’t use a black model on the cover and Naomi was chosen for the spot. She was the second black model to appear on Vogue UK. Naomi, with such strong 4th and 10th houses, can expect to be around a long time in her industry as well as working for her charities.