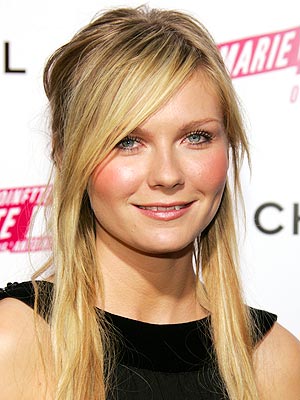 Kirsten Dunst is a multi-faceted performer and person which her chart reflects. She is a Taurus but we do not get that “mother earth,” vibe from her due to her twinkling Leo Moon and Venus in Pisces. Drama being a Leo ruled activity and Kristin’s Moon being there shows from the tips of her shiny blond hair and her eyes are twinkling and other-worldly, giving her Pisces Venus their due. She is able to take on different characters with these placements alone.

Kirsten seems a bit magical and a bit like the girl next door and the girl next door comes from having a stellium in Libra. Kristen’s Kristian’s style is one that is hard to pin down because she has so many different elements to her making her a person that is great to watch in a role she may chose and one that dresses in many different styles but always keeps to that Leo Moon with her shiny hair and clear skinned face with the perky smile.

Her perky smile and ability to wear pink come from her stellium in Libra. A Libra of any coloring can wear pink like all get out and Kirsten is no exception. She appears adorable at times too and that is very Libra. Libra is home to pink and the little suit and Kristen plays off the clothing that Libra’s often wear very well. A Libra wears layers well, as in suits, dresses with over coats, etc… They match things well and pull off a “girly,” or womanly look with ease. Kristen can be found in photos doing both of these and we cannot forget her costumes in “Little Women,” and “Interview with a Vampire.” Both of the films mentioned required a sort of “suit,” or costume that called for a lady like demeanor and Kristen stole scenes in both movies wearing just this style we are discussing.

Still on off hours we see Kristen in shorts, sweats, yoga pants and T-shirts, falling back on her Taurus Sun and wanting the comfort that comes from all cotton clothing that lays loose on the body and does not require a lot of thinking to put together. I think she looks lovely in her off hours when she is in the formula of worn in jeans, a T. and a scarf. This is classic “earth wear,” and I always advise Earth signs to get this sort of “uniform,” together for everyday wear. Kristen gives us two personalities here when she appears on the red carpet in gowns and even sequins but spends the majority of her down time in that earthy uniform. She keeps her hair long and a bit natural, (Taurus,) but always cut in a “nice,” style, (Libra.)

When Pisces in is Venus it is in it’s home and it give Kirsten an ability to play many different characters with skill. Her mother got her into “show business,” and we can see that from her Moon being in Leo. Moon in Leo often gives us a stage mother and this is no exception. Kristen once complained about being pushed into acting by her mother but has since come to terms with it as a Venus in Pisces will transcend most of the hardships heaped upon it and forsake the ugly for art. Kristen is an artist and has taken her experience and used her earthy sense to make it work for her and her lifestyle. We seldom see Kristen in the tabloids as doing anything completely “off,” because she is in her element most of the time given her chart.

I love to see the entertainers with Libra and Pisces in their charts for they appear on the red carpet and at premieres in the greatest dresses of all colors and take us somewhere with their natural fashion sense. Also, given Kristen’s chart I think we will see much more from her as she grows as an artist. Kristen also sings and that is another outlet for Taurus in a lot of cases. Taurus, ruling the throat, has given us many singers of talent.