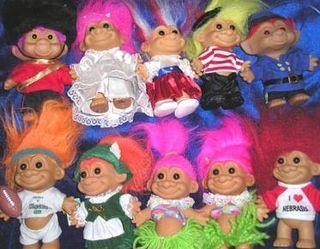 As far as deliberately provoking an emotional response in others goes, I was really surprised that nearly half the people who responded to the poll copped to doing this! And I don’t know what to say. Can’t you people think of something else to do? Apparently not!

Oh well. It takes all kinds. We need everybody just the way they are. And here are further details on Scott’s latest stunt with his mother… and his propensity to provoke others in general:

“I use to do that a lot when I was drinking,” he said.

Scott was the consummate troll. He proudly claims to have been kicked off every “channel”. IRC, I guess.

“I was banned!” he said. “Everybody banned me. They didn’t want anything to do with me,” he said, obviously proud of this accomplishment. “Get the fuck off here. And I used to love to do it. I’d get on there, find someone’s Achilles Heel and go right for it!” He laughed. “But I don’t do that anymore…”

“You just did it with your mother!” I was flabbergasted. We’d just talked about this fifteen minutes earlier.

“Well I know. She thinks she’s going to dinner! With her son. Her boy. She thinks that’s all that’s going on and then you hit her with the married thing. Elsie says you and I are married,” I said. “We’re like husband and wife! So what do you think about that, Mom? What do you say to that? Egads, Scott. You are truly full of shit.”

“I don’t know, Elsie. Her friend seemed to think it was pretty funny,” he said.

I roared. “You mean you told her that with her friend there?” I was incredulous.

“Well, yeah. And she laughed. Her friend thought it was pretty damned funny.”

“She just laughed and said her sons were mama’s boys too!” he said with a proud chuckle.

I snorted. “Okay. So then what did your mother do? She must have been pissed!”

Scott’s mother is a double Aries…

“Oh, you know. She got all flustered.”

He started to imitate her, which he can do to a T. I dissolved into laughter.

“Well you’re a real bastard,” I said. “However I do think it’s funny. But you better be careful”, my Capricorn warned his Cancer. “One of these days you’re going to pull something like this and she’s going to go home and die on you. Then what?”

“I’d feel bad. I’d feel horrible if that happened,” he said, not so convincingly.

“Right! Well I wouldn’t put it past her. If there was ever anyone who could die on cue, it’s her! Whatever it takes to leave you with maximum guilt and attachment…

He just laughed. This has been going on for years. And this is not attributable to his Cancer Sun. A Venus Mars Pluto conjunction is no small thing. Very Zorr

~~
Since 25% (so far) don’t know what a troll is… editing to add this: Troll according to Wikipedia