Modern Falling In Love Is So Disappointing!

I'm working on this years holiday guide. I found myself thinking about drive-in movies, or more specifically, intermission.

I have always, always wanted a boyfriend. Mars in Libra - on the hunt!  So you're in your car with whoever.  You're invited to visit the snack bar during intermission, which is exactly what you do, even if you have no money or anything - why?  So you can meet a boy?  So you can see and be seen and perhaps fall in love.

Just recalling this makes my heart pound. I always thought love was right around the corner - when I was young, I mean.

I don't think online shopping for a date compares at all. You have a flat, staged, filtered image and some words that are probably horse shit.  This does not compare to seeing a boy in line and trying to flip your hair and get his attention.  Am I crazy with this?

Now we lock everyone in their house, where they pretty much are, anyway.  We play them commercials all day, showing "happy people" who go to the door of their home to be handed whatever they desire. I'm sorry but this is not a good trade-off. What the hell have we become?

The thrill of seeing a good looking potential partner displayed on an internet (who may or may not even be real) just doesn't get the blood pumping like seeing a person out there in the wild, where you can read their energy and know for sure how you feel.

No wonder people are so disappointed in love.  It's machined! It's unnatural.

In real life, you see the person and your heart stops, then finds it's way into you throat.

The thrill of seeing a good looking potential partner displayed on an internet (who may or may not even be real) just doesn't get the blood pumping like seeing a person out there in the wild, where you can read their energy and know for sure how you feel.

No wonder people are so disappointed in love.  It's machined! It's unnatural.

In real life, you see the person and your heart stops, then finds it's way into you throat.

I wonder about this too. The results from online dating are so disappointing that I do imagine that some people date others that they feel only lukewarm about, because that's what they think is available, or they think they have no other choice, or because they think this one might be the "best of the bunch" -- compared to the rest of the online selection.

What happens when you see someone in real life, then? Someone who does make your heart stop? You can't stick with the other person anymore, not when you're confronted by genuine chemistry. Or if you do ... well, you just made yourself miserable for no good reason.

I think some people don't trust their own intuition anymore. I count myself lucky in that I am in my mid-30s and I still remember when men approached women in person. I honestly do not know what younger people will do these days, given that being online is the default setting now.

I won't date online, and I am betting -- rightly or wrongly -- that there are men who feel the same way. I'm just waiting for the right one to walk up. Patiently.

In the meantime, I am setting my bait as prettily as I can ?

I did not ever think love was just around the corner; it has always felt like a rare luxury. The older I get, the more of a feeling I will meet someone eventually that will just fit me and me them. I don't feel the need or want to date online. My friends are concerned I will be alone forever, not a fear for me at all, rather a happy single. I know several people who married people they have met online, and are very happy. I am very romantic and have had magical spontaneous dates with people I've just randomly met; maybe it is a generational thing (astrology wise). I have Uranus conjunct descendant and Neptune in the 7th house.

I was a teenager in the 70s. My personal life was hard, but when I was with my friends, everything seemed so free and easy. There was a big crowd of us. We were all friends, all knew each other. We were in our teens to late-twenties. We would pile into cars and drive off to the pool hall or pinball arcade where we'd hook up with more friends. The girls would usually stand off to one side and act like they weren't watching the boys, and the boys would show off and during intervals flirt with the 'ladies'. They were gentlemen and if not, the other guys would show then the door. What I remember particularly was how the women were women, even when wearing boots and jeans, and the guys were real honest-to-God men. I remember their smell and their masculinity. Their self-assuredness and their big smiles. Men and women liked each other in those days. We were friends first, sex was laid-back and fun. Sure, there was the odd a**hole here and there, but such people were not all that common and they were generally shunned. We went concerts sometimes every week, and saw top bands for $7. Or better yet, the big free music festivals in the summer. The bands were terrific and the energy of thousands of kids really pumped up with the sound was pure ecstasy. My friends congregated at one guy's condo, and many's the time we would all spend the weekend there, waking up in the morning and deciding to drive 200 miles just to eat the amazing breakfast at this one special roadside cafe. The cops were a nightmare, as ever, but at least there was no surveillance society watching your every move. We watched baseball games and went camping. We read books out loud to each other whilst playing chess and putting another record on the turntable. No computers, no mobile phones, no BS political correctness. You said what you thought. Conversation was intelligent, far-ranging and often lasted until the small hours of the morning. Because we didn't mind living together with up to ten of us sharing digs, our overheads were cheap and we had plenty of free time. There was this very powerful feeling in the air that together, we really were experiencing everything that life had to offer. We didn't have much, but we shared freely - clothes, food, cars, places to live. We were happy. We felt powerful, defiant and hopeful for the future. Not just my friends, but all the young people at that time. Maybe because of the Vietnam war, there was a collective tolerance, kindness and respect for one another. Not absolutely always, but mostly. At least, in the various circles I connected with. I think often of those days and I feel a searing grief for all that we have lost, and wonder how it could be that we have arrived at where we are now.

@eleanor-d Your youth would make a great book or movie

RT flight, including hotel on the beach, swim up bars, the whole 9 yards... breakfast included, transfers from the airport and a "welcome margarita" cost average $129 per person. I have paid as little at $99 for that that - flight and three days/two nights.

I went with my bf or in foursomes but often with just a bunch of friends.. like we would be half the plane! 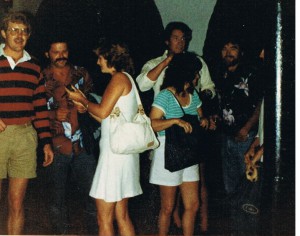 That's some of us. right there.  So many great trips. God, you can't even tell a joke anymore.

I remember that trip right there. I think there was about 20 of us, in a town with no taxis! This was a surprise, so we rented a few trucks (only thing available), and we rode to town in them and in the back of them an all. That's us in town.

I was with the blonde guy. He was an engineer and a bit of a dip - nickname, "Whitey", lol.

The girl in the white dress was with (and eventually married) the dark hair guy with the moustache. They rented Henry's house, after he died. Helped me clean it out and paint it too, for that matter.

Anyway, you could be in groups like this and singles could meet.

People smoked on planes back then. That's us, in a in a restaurant, having arrived in the junky trucks. I rode in the back (as I did throughout my childhood, with Henry). In fact it was a regular size truck, but it had a flatbed. I'd never done that before, it was like a hayride with no hay and definitely no safety, lol.

Mustache guy is cute! ? What a great pic.

@strawb Yes. Thank you. No one is posing! It's actual life.

I agree with the sentiment and the reasons mentioned... It's more of a shot in the dark when you're dealing with a 2D version of a person as opposed to 3D, you're missing so much information and that gut visceral reaction.

It's really hard... I think even my parents realize it's a lot harder of us (their millenial kids) than it used to be for them, during their time.

Ive noticed even during the last 10 years, men don't walk up to women as much anymore, even out in public or in bars, it's like they are too afraid, maybe of being labeled a perv or harassment...And if these restrictions don't ever lift I don't know if it will even be a possibility in the future anymore.  A super computer AI will do the matchmaking for those who have been selected as eligible for breeding based on DNA or some thing.... ? We laugh now but ...

@strawb the soul is being discounted.